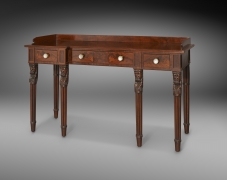 Carved heads, such as those that ornament the present side table—bearded, mustachioed, and with Turkish or Middle Eastern headdresses with tassels—were referred to as “mummy heads” during the early nineteenth century, a generic term for heads ultimately drawn from sources inspired by Egyptian antiquity that became popular in England and France. Adaptations of “mummy heads” were published in Thomas Sheraton’s Cabinet Maker, Upholsterer and General Artist’s Encyclopedia (London, 1804) and later in Thomas Hope’s Household Furniture and Interior Decoration (London, 1807).