In the work of Douglas Cooper, cities undulate and envelop. Their vistas and vantages roll toward the viewer as if on a wave, unfolding and highlighting the hidden spaces inherent to urban environments. The incline to an on-ramp and the curve of a river, stylistically-rendered in charcoal, present the opportunity to see something new in an area long since forgotten. Mutable, but never muted, cities shift and swell. Cooper’s work depicts the idiosyncratic movements of a city through its rivers and roads, always translating that city’s rhythm.

In Viaducts & Neighborhoods, his debut solo exhibition with Hirschl & Adler Modern, Cooper surveys the New York City area and its bridges in 18 large-scale drawings. While a bridge offers Cooper the opportunity to explore an area’s topography and waterways, this new body of work focuses on the specific neighborhoods where bridges land and depart: “their approaches more than their spans,” describes Cooper. By compressing the picture plane so that foreground, middle-ground and background all share the same space, the artist generates multiple angles from which the viewer can experience these approaches. There is the view from the neighborhood itself, from within in the streetscape; under viaducts and elevated railways, or on overlooking terraces and rooftops. All of New York City washing over the viewer. And there is the view from the roadway, from behind the dashboard; accelerating skyward or plunging below the neighborhood’s horizon. Within all of these drawings, the city and the viewer seem to rise-up to meet one another - the pulse of New York City quickening the viewer’s own.

Cooper’s works on paper convey the dynamic of a great metropolis. Captured is the rush of people and traffic in and through neighborhoods and over bridges. Major movements, linked to domesticity and commerce alike, are given pride of place. There is no separation between the titular viaducts and neighborhoods; their traffic patterns overlap. It is this cohabitation that is so important to the artist, because as Cooper himself reminds us, “bridges also connect”.

Douglas Cooper was born in 1946 in White Plains, NY. He earned an undergraduate degree in Architecture from Carnegie Mellon University in Pittsburgh, PA in 1970, where he has taught Drawing in the School of Architecture since 1976. He has had solo exhibitions at galleries in Cologne, Germany; Frankfurt, Germany; New York, NY; Pittsburgh, PA; Seattle, WA; and Washington, DC. For the last 15 years Cooper has focused on large panoramic murals (up to 200 feet-long and 15 feet-high) for courthouses, markets, and university centers worldwide. These projects become a collaboration with other artists and local residents to incorporate their life stories into the works with drawings in their own hands and with stories in their own languages. These murals can be found in Frankfurt, Germany; Doha, Qatar; New York, NY; Philadelphia, PA; Pittsburgh, PA; Rome, Italy; San Francisco, CA; and Seattle, WA. Cooper is the author of a memoire, Steel Shadows, about his mural work in Pittsburgh, PA, as well as a well-known text on drawing, Drawing and Perceiving. In 2000 he was honored by the AIA at its national convention for the contribution of his mural work to the field of architecture. Cooper lives and works in Pittsburgh, PA.

Douglas Cooper Viaducts & Neighborhoods opens on Thursday, May 28 and runs through Friday, June 26, 2015.  Located in the landmark Crown Building at the world-famous corner of 57th Street and Fifth Avenue, Hirschl & Adler Modern is open Monday through Friday, from 9:30 am to 4:45 pm. 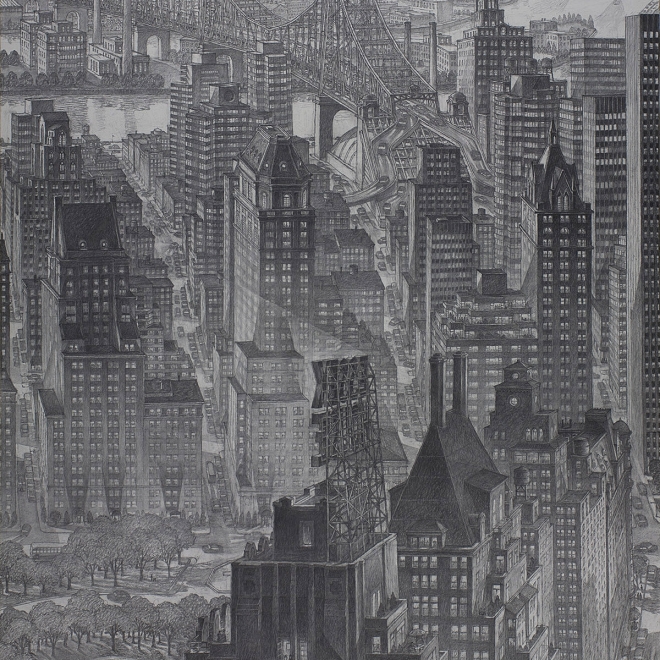 Douglas Cooper
Back To Top