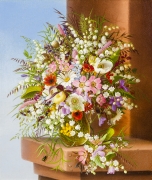 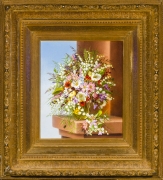 EX COLL.: Edward White, and by descent to his granddaughter; to [Hirschl & Adler Galleries, New York, 1972]; to Mr. and Mrs. Charles Shoemaker, Los Angeles, 1972, and by descent in the family

Spring Bouquet depicts a dense arrangement of flowers placed in a simple glass vase, which rests on a stone ledge overlooking an expanse of blue sky. Poppies, tulips, daisies, and many other varieties of flowers fan out across the image, painted with Dietrich’s crisp line and command of tonal modeling. She also used traditional devices, such as the dew drops and small beetle on the side of the ledge, to suggest the freshness of the bouquet. Among Dietrich’s works, this one is distinguished by its unusually bright palette.

The format Dietrich employed in this work derives from early seventeenth-century still lifes by Dutch painters such as Ambrosius Bosschaert the Elder, who often placed his frontal floral arrangements in a niche against a blue sky. While Bosschaert and his contemporaries tended to present a few exotic or carefully cultivated specimens, Dietrich chose a large number of mostly small, common flowers that could be found on a country path, or in any garden. Her more democratic and Victorian taste appealed to an American audience accustomed to such subjects from the easels of its native still-life specialists