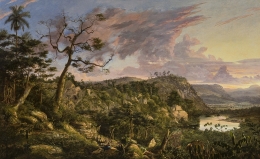 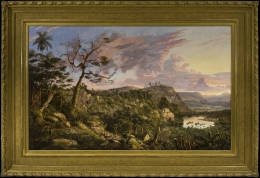 EX COLL.: the artist; by descent to his son, Ernest Henry Brownell (1867–1945), Bristol, Rhode Island; and by descent in the family

Limestone Cliffs of Bolondrón, Cuba is one of the largest Cuban landscapes by Brownell to have come to light. The rugged limestone cliffs, situated 25 miles southeast of the port city of Matanzas and 10 miles west of the picturesque town of Jovellanos (named Corral de la Bemba in Brownell’s time), rise to an elevation of over 900 feet, and are nearly as wild today as they were in Brownell’s time. The cliffs’ proximity to the sugar center of Matanzas certainly made them a regular destination to Brownell, who, by the skill with which he depicted the sweeping landscape in this monumental painting, was intimately familiar with the area’s topography, geology, flora, and fauna. Brownell focused on the regions natural characteristics, but in typical fashion, also captured the encroachment of civilization, seen in the right distance in the structures and cultivated fields in the distant valley beyond the lake. In the center foreground, two resting natives—one apparently fast asleep—are being eyed by a large iguana. The region’s cave-riddled limestone cliffs are an important habitat of the Cuban cliff swallow (Petrochelidon fulva cavicola); the mouth of one of the many caves is visible on the face of cliff to the right of the trunk of the dying tree.