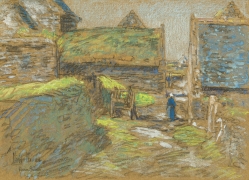 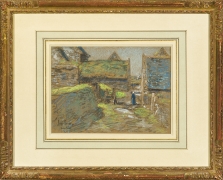 Hassam took his fourth and final trip to Europe in 1910, essentially recapitulating the itinerary of his 1897 sojourn, with the exception of Italy. He traveled to Spain and France where he visited Paris as well as other outlying regions. In Brittany, Hassam worked in two small, coastal villages: Lannion and the neighboring medieval village of Perros-Guirec, where he executed this drawing.

Brittany Barns, Perros-Guirec features a series of brick barns that frame two central figures facing out to the sea, visible in the distance. The drawing belongs to a group of small, impressionistic studies from 1910 that record the architecture of Spain and France. Two other examples, Houses on the Place, Lannion and Calle Venacio Gonzalez, Toledo, are in the collection of the Cincinnati Art Museum. While Hassam continued to paint full-size oils during his time in Europe, he enjoyed experimenting with a variety of mixed media in smaller, less-resolved compositions, layering chalk, watercolor, gouache, and pencil on toned paper. Hassam left areas of these compositions untouched, allowing the color of the paper to act as a midtone counterpoint to shadows and highlights drawn in chalk and watercolor. In Brittany Barns, Perros-Guirec, Hassam skillfully implied the form and texture of this sunbathed, rustic town by applying blue and green staccato strokes and broad swathes of chalk, watercolor, and gouache to tan paper.

Brittany Barns, Perros-Guirec will be included in the forthcoming catalogue raisonné of Hassam’s work in preparation by Stuart P. Feld and Kathleen M. Burnside.