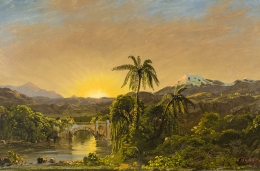 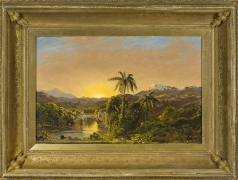 Ecuador’s massive volcanoes played a vital role in Church’s tropical iconography, as apparent such monumental canvases as Heart of the Andes (1859; The Metropolitan Museum of Art, New York) and Chimborazo (1864; The Huntington Library, Art Collection, and Botanical Gardens, San Marino, California), which feature views of Chimborazo, an inactive volcano (and the country’s highest with a peak elevation of 20,548 feet) located about 93 miles south-southwest of Quito. Church also depicted Chimborazo in works of a more modest scale, such as in the present example. In keeping with his Andean pictures, the artist presents the observer with a panoramic vista that shows Chimborazo on the right, silhouetted against a luminous sky and flanked in the fore- and middlegrounds by dense jungle foliage bisected by a placid waterway. The distant volcano on the left, enveloped in a veil of atmosphere, may be Tungurahua.

The refined handling and fully resolved composition suggests that Church painted the work back in New York, where he would synthesize elements from improvisatory sketches and drawings into an aesthetically pleasing design, combining his interest in natural science with a high degree of artistic license. Indeed, the idealized, Claudian-like setting was likely added to enhance the romantic appeal of the image, a strategy that may also have led to his decision to include an arched stone bridge on the left––a picturesque, Old World motif (reminiscent of Cole) that alludes to the harmony between man and nature.