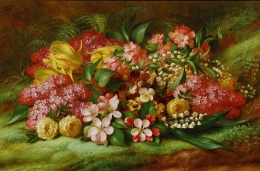 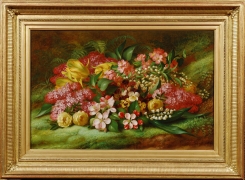 RECORDED: Clara Erskine Clement Waters and Laurence Hutton, Artists of the Nineteenth Century and Their Works (1879; revised ed., 1884), p. 325 as “‘The Seasons’ (a series of four pictures belonging to Richard Butler)”

In 1870–71, Hall executed an ambitious group of four floral still lifes intended as an allegory of the four seasons. All four works, which were exhibited in the National Academy of Design’s annual exhibition in 1871 and were described in the exhibition’s catalogue as “The Seasons,” were lent by Richard Butler, a private collector. This makes it likely that the pictures were painted for Butler on commission. At some unknown point after the exhibition, the four paintings were dispersed, and for many years the paintings remained unidentified. Now, however, three of the four works have surfaced, including Spring, and those representing Summer (private collection; sold by Hirschl & Adler in 2006) and Winter (private collection; see Wolfgang Born, Still-Life Painting in America [1947], no. 66 illus. as “Holly”). All three works are signed and dated either 1870 or 1871, and all share precisely the same dimensions, indicating that the three works almost certainly belong to the same group. (The fourth work in the series, Autumn, has not been located.) Furthermore, each of these still lifes is composed of the flora associated with the season in question. For example, in Spring, one sees lilacs, cherry blossoms, parrot tulips, and pansies, among others.