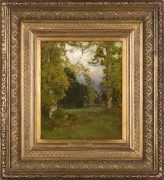 Late Afternoon is characteristic of Inness’s smaller format landscapes. A tall tree in the left foreground extends to the sky beyond the canvas, while a pair of trees is present in the right foreground of the canvas. The middle ground is comprised of a grassy field with two saplings, and a number of evergreens extending into the distance. A cloudy sky with a small patch of blue can be seen through the trees’ branches. This painting may have served as the compositional framework for Harvest Moon, 1886 (oil on canvas, 40 x 29 3/4 in., private collection). Both paintings have a similar patterning of branches and foliage with precise outlining and details. However, the layering of the paint and fine detailing in Late Afternoon indicate that Inness held this work in the same regard as his formal paintings, even though he probably used it as a study for the larger Harvest Moon. 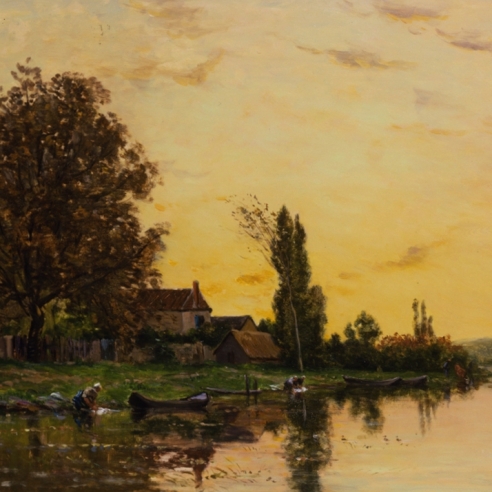