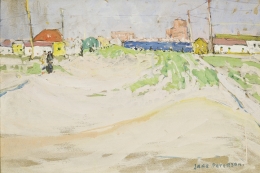 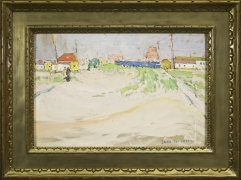 Harbor with Dunes is a portrayal of the harbor at Gloucester, Massachusetts. The bustling fishing port of Gloucester was one of Jane Peterson’s favorite domestic haunts. She returned there repeatedly during her most active years, between 1910 and 1924, and, once she married Bernard Philipp, maintained a home in nearby Ipswich. In an indirect manner, Peterson biographer J. Jonathan Joseph has suggested that Peterson was especially prolific in Gloucester in 1915–16. Among her Gloucester oils dating to these years are Gloucester Street Scene (Museum of Art, Rhode Island School of Design, Providence; see J. Jonathan Joseph, Jane Peterson: An American Artist [Boston: 1981], p. 12 illus.), Low Tide, Gloucester (private collection, Connecticut; see ibid., p. 55 illus. in color), and Dock Walk (Delaware Art Museum, Wilmington; see ibid., p. 90 illus.).

Harbor with Dunes is among the most broadly gestural works in Peterson’s oeuvre. Peterson reduces the rolling forms of the sand dunes to just a few washes of lightly tinted gouache. She occasionally lets the brush run dry, leaving relatively large swaths of the untreated paper visible. These she integrates seamlessly and masterfully into the overall form of the dunes. This is Peterson at her most modernist and abstract, and demonstrates her mastery over the gouache medium.