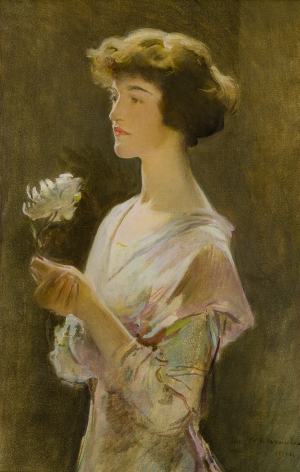 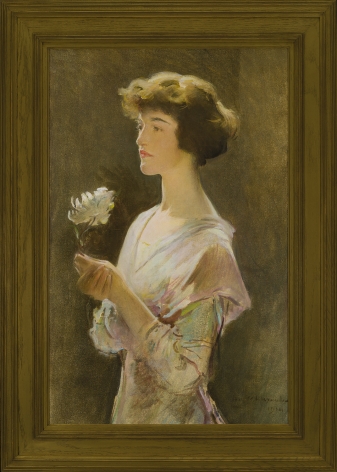 Julia Swift Gilbert was born in Saint Paul, Minnesota, on April 30, 1892, to the architect Cass Gilbert and his wife, Julia Tappan Finch Gilbert. Following the family’s move to New York in 1898, the Gilbert family divided their time between Manhattan and their summer home in Ridgefield, Connecticut. (The house is known today as the Keeler Tavern Museum.) In keeping with Cass Gilbert’s work as an architect, he frequently collaborated with leading American sculptors, including his good friend Daniel Chester French, who was commissioned to create the allegorical sculpture groups for the United States Custom House. Through such connections, Julia came to know many members of the artistic and cultural elite of her day, among them French. Indeed, as reported in American Stone Trade, when French was trying to find the right model for his Miss Manhattan, one of a pair of allegorical figures (the other was Miss Brooklyn) installed at the Brooklyn entrance to the Manhattan Bridge in 1916, he “turned his eyes away from the professional ranks and began to look for his ideal in the ranks of society beauties . . . Miss Gilbert fit the bill exactly and after some persuasion consented to pose for the head and face of the statue.” (“Miss Manhattan,” American Stone Trade 14 [June 1, 1915], p. 28.)

Painted during the summer of 1914 when Alexander was staying in Onteora, New York, the portrait, executed on the coarsely woven canvas that Alexander preferred, shows Julia standing in three-quarter profile against an unadorned backdrop. Consistent with the contemporary practice of equating female beauty with flowers, she holds a lush peony (a blossom associated with romance and good fortune, as well as bashfulness) in her hands but seems uninterested in its form or scent; there is a seriousness and vulnerable quality to this lovely young woman, who directs her gaze away from the viewer, seemingly lost in a moment of quiet contemplation.

Portrait of Julia Swift Gilbert reveals the new concern for light and color that characterized Alexander’s work following his return to the United States, where Impressionism was the dominant style of the day. Julia is bathed in a softly glowing luminosity that creates sparkling highlights on her hair (cut fashionably short), face, and portions of her dress, the latter fluently rendered in an array of pastel tones that counterbalance the darker background. Certainly, Alexander’s sensitive portrayal of his sitter conveys her youth and feminine grace and captures her distinctive physical attributes, such as her full lips, strong chin, and swan-like neck. Not surprisingly, Cass Gilbert was enchanted with his daughter’s likeness, informing Alexander: “It is an excellent portrait and it has all the charm of her refined and beautiful nature which you have so fully understood and so delightfully suggested. No one can do this sort of thing so well as you” (Cass Gilbert to John White Alexander, May 27, 1914, John White Alexander Papers, Archives of American Art, Smithsonian Institution, Washington, D.C., Correspondence, 1914, box 1, folder 57). He went on to say, “We are not only delighted with the picture but happy in the possession of such a work of art by your hand. You have made a friend for life of Julia and of us all."