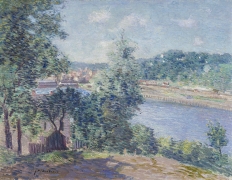 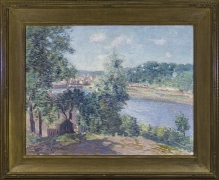 EX COLL.: George Hann, Pittsburgh, Pennsylvania; sale, Parke-Bernet Galleries, New York, February 24, 1945, no. 84; [Milch Galleries, New York]; [Macbeth Gallery, New York]; Mr. Sydney Levyne, Baltimore, Maryland, until 1969; to [Hirschl & Adler Galleries, New York, 1969]; to Mr. and Mrs. Ralph Spencer, New York, 1969–78; to [Spanierman Galleries, New York, 1978]; to [Hirschl & Adler Galleries, New York, 1978]; to Daniel J. Terra, Chicago, 1978–92; to Terra Foundation of the Arts, Chicago, 1992–95; sale, Sotheby’s, New York, May 25, 1995, no. 9 illus. in color; to private collection, La Jolla, California, until 2007
River Scene near Norwich, Connecticut was painted by Weir about 1910. In the latter part of that decade, Weir frequently spent time in and around Norwich, which lies on the Thames River, north of New London, in the eastern part of the state. Among his Norwich canvases of 1908–10 are several notable for their gentle portrayal of man’s impact on the landscape. Weir had earlier staked his claim to this innovative fusion of modernity and the more traditional, bucolic landscape setting with his iconic The Red Bridge (1895, The Metropolitan Museum of Art, New York), which in placid, silvery tones depicts a bright red modern bridge rising over the Shetucket River, near Norwich. Weir returned to this sort of subject frequently over the rest of his career, and in 1908, he completed a major canvas, Building a Dam, Shetucket (The Cleveland Museum of Art, Ohio), which in silvery tones almost poetically celebrates the encroachment of human industry onto the shores of the Shetucket, a tributary of the Thames River that passes through Norwich from the northeast. The sense of bucolic serenity is amplified in Building a Dam by the carefully plotted composition, which engulfs the bridge elements in a thickly treed corner of the riverbank. Likewise, in River Scene near Norwich, Connecticut Weir again uses paler, more silvery colors and carefully constructed composition—in this case, the prominent house and trees in the foreground—to seamlessly and harmoniously integrate into the background the signs of milling and human settlements that lie along the gentle curve of the shore across the river. Weir’s ability to balance the inclusion of what many consider potentially ugly formal elements into peaceful, almost ideal settings set him apart from his peers, and his paintings in this vein are the best and most memorable of his career.