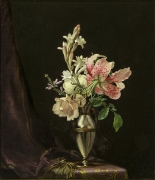 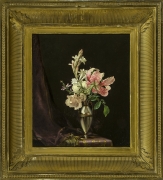 The present still life was executed in 1871, the same year that Heade began work on his dramatic series of The Gems of Brazil, a group of luxuriant and sultry tropical still-life paintings with hummingbirds in outdoor settings, that was to shape his approach to still-life painting for a number of years, until he moved to Florida in the 1880s and adopted a more reductive compositional approach. Still Life with Flowers in a Vase, though it was painted virtually at the same time as The Gems of Brazil, is linked stylistically with his earliest still lifes in its straightforward representation of cut flowers in a vase presented on a tabletop. Heade worked in this format beginning in the early 1860s, and over the course of the decade he increasingly set these still lifes in more elaborate and sumptuous backdrops. Here Heade places his carefully arranged vase containing a rubrum lily, heather, roses, and a tuberose, on a table covered by an eggplant-colored patterned tablecloth and backed by a matching frilled cloth. The sumptuous materials, intricate pattern, fine details, interior setting, and dark tones Heade used here are consistent with many of the paintings by Heade painted at this time, which what Stebbins has denoted “High Victorian” in style. Stebbins notes that these works “are consistent with his work of the same years in landscape; one thinks of the intricate compositions of such contemporaneous works as Thunder Storm on Narragansett Bay, April Showers (both 1868), Sunset on the Marshes (1867), or Coast of Jamaica (1874), with all their carefully plotted details and patterns” (Stebbins, 2000, p. 131).