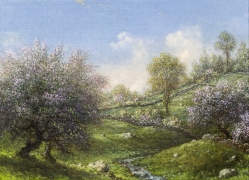 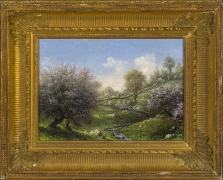 During the late 1860s and into the mid-1870s, Heade also investigated new themes and techniques, as apparent in a series of pastoral landscapes in which he experimented with a “proto-Impressionist style,” using a high-keyed palette and a painterly technique as a means of exploring color and fluctuations of light and air (see Stebbins, The Life and Work of Martin Johnson Heade, p. 115). These paintings, which features views of rolling meadows dotted with flowering apple trees, were inspired by the scenery Heade encountered in the Connecticut River Valley, an area, known for its fertile pasturelands, that represented the “epitome of the settled landscape . . . an ideal combination of nature and man” (Martha J. Hoppin, “Arcadian Vales: The Connecticut Valley in Art,” in Kerry Wayne Buckley, ed., A Place Called Paradise: Culture and Community in Northampton, Massachusetts [Amherst, Massachusetts: University of Massachusetts Press, 2004], p. 232). The first and best known work from the series, April Showers (Spring Shower, Connecticut Valley) (1868; Museum of Fine Arts, Boston), was followed during the mid-1870s by such intimate canvases as Girl in a Hillside, Apple Blossoms (1874; Florence Griswold Museum, Old Lyme, Connecticut) and Girls in an Orchard (circa 1874–75; private collection, New York). Heade’s interest in depicting the unpretentious corners of rural Connecticut is likewise apparent in Pink Apple Trees, in which a winding stream and a low-lying stone wall leads our gaze from the foreground to a sloping hillside in the distance. In contrast to the relaxed brushwork used to denote the sky and clouds, the artist interprets the landscape in terms of tiny, stippled brushstrokes, a technique that creates lush surface effects and imbues the image with a feeling of spontaneity––pictorial concerns that, along with the informal subject, deviated from the standard practices of the Hudson River School, whose emphasis on carefully transcribed wilderness panoramas was becoming increasingly passé (see Stebbins, The Life and Work of Martin Johnson Heade, p. 115).

In keeping with his casual subject matter and the pleasant weather conditions at hand, Heade adheres to a chromatic approach wherein the pinks and touches of white used to denote the floral elements merge and mingle with the cool greens of the grass-carpeted pastures, bordered in the upper register by white clouds and a patch of blue sky. In viewing the painting, one gets a sense of fragrant air, spring sunshine, and the unspoiled beauty of the Connecticut countryside, as well as Heade’s close observation of his immediate surroundings.

Stebbins has suggested that Heade’s depictions of blooming fruit trees may have set an example for J. Appleton Brown (1844–1922), an American exponent of the Barbizon style who adopted the same subject during the early to mid-1870s (Stebbins, The Life and Work of Martin Johnson Heade, p. 115). Suffice to say, Heade’s own involvement with New England apple trees, as well as the painterly strategies that would later be associated with Impressionism, was relatively short-lived. After 1875––presumably satisfied by what this small but very personal group of pictures had taught him about light, color, and form––he resumed painting tropical pictures and Victorian still lifes in a hyper-realist manner.