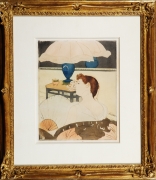 A dedicated printmaker, Mary Cassatt produced more than two hundred aquatints, etchings, drypoints, and lithographs over a period of thirty years. The Lamp is part of a series of ten color prints that she executed, with the help of M. LeRoy, a professional printer, in 1890-91. Although Cassatt frequently based prints on her earlier paintings and pastels, the ten color prints are remarkable not only for their original compositions but also for their appropriation of Japanese printmaking styles. The making of these prints was extremely labor intensive, as it relied on a combination of a number of printmaking techniques, including drypoint, etching, and aquatint. In her catalogue raisonné of Cassatt’s graphic work, Adelyn Breeskin notes: "These prints were her next great triumph and one which would give her claim to fame if they were her sole accomplishment. They are indeed her most original contribution, adding a new chapter to the history of the graphic arts and, as color prints, have never since been surpassed" (Breeskin, p. 21).

Breeskin also notes that this suite of prints was especially novel not only because of their japonisme, but because she gave the models themselves Japanese features: "In The Lamp ... the table and its ornaments are more Oriental than European. Such details are not copied. They are not even borrowed directly. They are the result of such thorough study and understanding that they are absorbed into the artist’s feeling and thought and thereby become a part of her own expression" (Breeskin, p. 22).

Though The Lamp and the other color prints Cassatt executed concurrently were revolutionary in Western art, they failed to receive correspondingly strong critical acclaim. These prints were shown, along with works by her friend Camille Pissarro, in 1891 at Durand-Ruel in Paris, and again at Durand-Ruel’s New York gallery later that year. Neither show was successful, as very few of the prints were sold. Despite these setbacks, Cassatt remained encouraged by the support of a few friends, critics, and collectors. Cassatt produced several additional color prints of advanced technique over the next few years. Today, they are considered among the finest prints in American art, a fitting tribute to Cassatt’s radical approach and determination.

Of the ten color prints Cassatt showed at the Durand-Ruel galleries, The Lamp is perhaps the one that most reveals Cassatt’s debt to Japanese prints. The Lamp also demonstrates Cassatt’s growing mastery of the aquatint technique. The evolution of the print’s composition is slight, with only a few minor changes from the first to the fourth and final state. Earlier prints in her series of color aquatints required as many as seventeen states for the artist to be satisfied. In The Lamp, Cassatt, having settled on the composition early on, was able to embark on a remarkable exploration of color printing, in which she used the aquatint technique on all three plates used to make the final print. By the final state, of which the present print is an example, Cassatt had carefully reworked each color region to avoid overlap and maximize the crispness of line. The result is one of most dynamic and colorful of her series of prints, a true masterpiece in American printmaking.