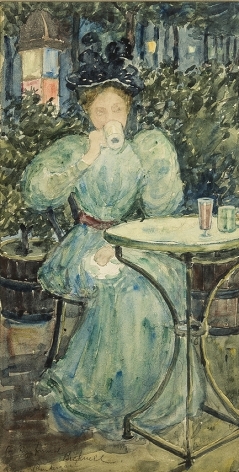 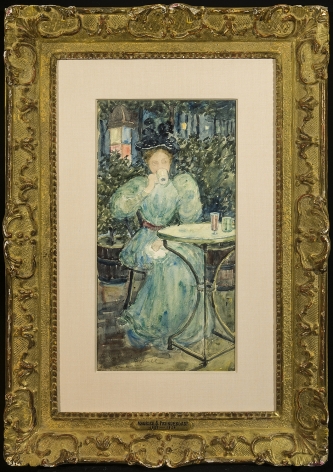 Woman at a Table, which depicts a single woman at an outdoor cafe, is a highly accomplished work that stands at the very beginning of Prendergast’s emergence as a major figure among the American Impressionists. It dates from Prendergast’s career-making stay in Paris in 1891–94, when he began to absorb the lessons of both Manet and Whistler in style and subject. From Manet, Prendergast adopted as his principal subject matter views of women in outdoor settings, often viewed in the swirl of the urban crowd, individual and anonymous at the same time, while Prendergast’s freely applied thin washes of tonal color were inspired by the works of Whistler.

The watercolor is inscribed “To my friend Bicknell,” a reference to Albion Harris Bicknell (1837–1915), a Boston-area painter and printmaker. Bicknell, an admittedly minor figure in American art, was important in one respect, in that is that he was among the earliest to experiment with monotype printmaking. Bicknell began making monotypes about 1875, and in the early 1880s showed them variously in Boston at the J. Eastman Chase Gallery, and in New York at the Union League Club, Salmagundi Sketch Club, and National Academy of Design. Prendergast himself became a major producer of monotypes beginning about 1895, when he was living in Boston after his return from Paris. It may be that Prendergast was inspired to produce monotypes through his friendship with Bicknell. Bicknell himself began to paint in watercolors about the same time, perhaps as the result of his friendship with Prendergast.