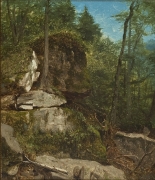 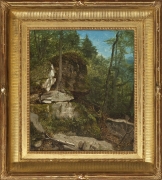 EX COLL.: the artist; to his sister-in-law, Marion (Mrs. Malcolm) Gifford; to her granddaughter, Frances Gifford Cummings (the artist’s great-niece); to [Hirschl & Adler Galleries, New York, 1972–81]; to private collection, 1981 until the present

The present oil sketch of Kaatskill Clove (Kaaterskill Clove) was executed about 1860–65. Gifford frequented Kaaterskill Clove and the surrounding vicinity on several occasions and made a number of pencil and oil sketches of the local scenery. Like many American landscape painters, Gifford produced throughout his career a large number of “painted sketches,” smaller works, often painted on paper, which were often executed entirely en plein-air. (For a comprehensive study of American painted sketches, see Eleanor Jones Harvey, The Painted Sketch: American Impressions from Nature 1830–1880, exhib. cat. [Dallas Museum of Art, 1998].) These sketches, although occasionally preliminary exercises in preparation for a larger picture, often were elaborate ways for artists to “feel out” qualities of light, atmosphere, and perspective. Between 1830 and 1880, sketches formed a significant component of the annual exhibitions of the National Academy of Design, New York, and a ready market of newly affluent collectors acquired these works.

In this sense, then, the present work is a sketch. Gifford’s sketches record the artist’s working process, since he frequently made changes to the composition from sketch to finished exhibition picture. While it is not known if A Sketch in Kaatskill Clove ultimately served as a study for a larger exhibition piece, it is nonetheless a complete painting in its own right. Gifford here carefully observes the forms and especially the dry, earthen coloration of the moss-covered rocks and broken branches against the brilliant greens of the enveloping Catskill Mountain flora and the electric-blue sky.