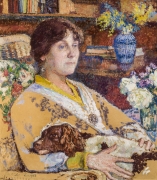 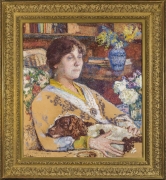 EX COLL.: [Hugo Perls, New York]; to private collection, 1959, and by descent in the family, until the present

A talented singer and pianist, Laure (1871–1916) and her husband, the composer Georges Flé (1862–1937), were close friends of Van Rysselberghe and his wife, Maria. Van Rysselberghe painted numerous portraits of Laure (the van Rysselberghes often called her “Laurely”), including a major neo-impressionist canvas from 1898 that is now in the collection of the Musée National d’Histoire et d’Art in Luxembourg. She also appears in his Promenade (1901; Musées Royaux des Beaux-Arts de Belgique), which features four women walking on the beach at Ambleteuse, France, where Laure and her husband owned a summer residence called Villa Robinson.

The present portrait shows Laure, at age 42, seated in an armchair in a well-appointed interior holding an affectionate springer spaniel in her arms. The work was painted in Saint-Clair, a quiet village on the Côte d’Azur, near Le Levandou, where van Rysselberghe maintained his home and studio from 1911 until his death in 1926. At the time it was painted, Laure’s health had deteriorated and, as she was living in Saint-Clair, the Rysselberghes looked after her.

In keeping with his later approach, van Rysselberghe synthesizes divisionist brushwork (evident, for example, in his depiction of the blue vase in the upper right) with broader strokes of pigment, as apparent in his rendering of the sitter’s dress. His strong sense of design is reflected in the carefully structured composition, artfully cropped to convey a feeling of spontaneity and intimacy that helps engage the viewer. The rich palette, in which cool blues, violets, and greens merge and mingle with vibrant shades of yellow, orange, and red suggest the impact of Fauvism, while the lively patterning and the domestic subject link the painting––an homage to an old friend––with the indoor interiors of Nabis painters such as Pierre Bonnard and Edouard Vuillard.