Silk embroidered dress worn by Rebecca Janey on the occasion of her wedding to Joseph Merrefield in July 1848, and pictured in the wedding portrait by Thomas Sully. 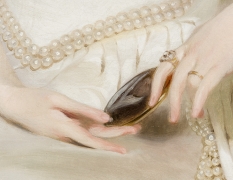 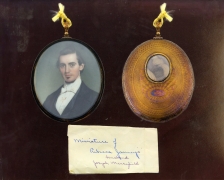 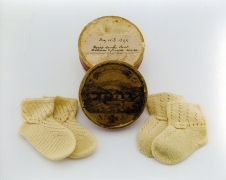 In February 1849, Thomas Sully began to paint Rebecca Janney Merrefield, the young wife of Joseph Merrefield, a Baltimore merchant. It was not Sully’s first commission for the Janney family. In 1844, he had painted Rebecca’s older sister, Elizabeth Howell Janney (1823–1846). Elizabeth died tragically young in 1846, followed soon thereafter by her infant son, William. Rebecca Janney married Joseph Merrefield in Baltimore in July 1848. In early 1849, she engaged Thomas Sully to paint two family portraits, one of herself and a second one of her mother Hannah Howell Hopkins Janney (1791–1858). From the beginning of February to the beginning of March, Rebecca and her mother sat for their portraits. Sully painted Hannah Janney in somber dress, wearing a black cape reflecting her situation as a widow. Rebecca, however, is resplendent in her wedding dress. She was, in fact, at the time, six months pregnant and carrying twins.

Rebecca Janney was a relation of the enormously wealthy and philanthropic Johns Hopkins. Moreover, she was a relation twice over: both her father, Joseph Janney, Jr. and her mother, Hannah Howell Hopkins were related to Hopkins. Merrefield was born in Ohio and raised in Philadelphia in a Quaker family. Rebecca Janney’s father Joseph Janney, Jr. (1780–1841), worked as a merchant with the Baltimore firm of Janney, Hopkins and Hull. When Joseph Merrefield married Rebecca Janney in July 1848, he, too, found a place in the Hopkins mercantile orbit. By the evidence, Merrefield proved able, energetic, and reliable. After the death of John Hopkins in 1873, Merrefield appears to have given up business for full-time involvement in civic affairs and engagement with the bequests of Hopkins, in particular the Johns Hopkins Hospital. Hopkins had been specific about the makeup of the philanthropic institutions to be founded with his bequests. Merrefield was named by Hopkins as a founding trustee of the Johns Hopkins Hospital and then resigned to become its first Treasurer, a position which he occupied until his death. Additionally, he served as President of the Society for the Protection of Children, Secretary of the Baltimore Manual Labor School, and the Maryland Historical Society, and was a member of the Sons of the American Revolution.

This portrait is accompanied by various family artifacts, including, among other things, the wedding dress seen in the portrait; the portrait miniature of Joseph Merrefield held in by Rebecca in the portrait; and a round cardboard box containing two pairs of knit baby socks worn by her twin boys after their birth in May 1849.