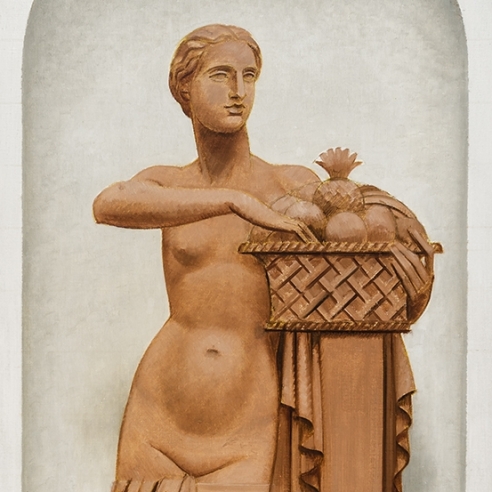 In the first half of the 20th century, Bernard Boutet de Monvel cut a dashing figure: a painter, etcher, sculptor, fashion illustrator, commercial artist, and interior decorator whose patrons constituted the cream of society in France and the United States. Already an established artist, in 1914, Boutet de Monvel interrupted a burgeoning career to serve with the French forces in World War I. Wounded at the Battle of the Marne, he returned to combat and was decorated for his heroism and daring and made a member of the French Legion d’Honneur for his service as a bombardier. With peace, he resumed and expanded his multiplicity of activities.

Bernard Boutet de Monvel was born in Paris, heir to a century-long family tradition of artistic endeavor in theater, opera, literature, and publishing.His father, Maurice Boutet de Monvel (1950–1913), a well-known painter and watercolorist, was much beloved for his work as an illustrator of children’s literature. Initially tutored at home, Bernard began his academic study in 1897 with the painter Luc-Olivier Merson (1846–1920) and the sculptor Jean Dampt 1854–1946). He took up etching in 1898 and achieved immediate success and recognition in that medium. In 1903, he sent paintings  to the Société National des Beaux Arts (The New Salon) and in subsequent years, to the Salon des Indépendants (The Independent Artists Show) and the Salon d’Automne (the Autumn Salon). A trip to Florence in 1904, where he admired the Italian primitive painters, particularly Giotto, persuaded him that the distinction between fine art and decorative art was a fallacy.  By 1910, Boutet de Monvel had established himself as a painter of portraits and genre subjects. His 1910 portrait of Prince Léon Radziwell, a dedicated sportsman who was heir to a Lithuanian title and a French fortune, announced in no uncertain terms this artist’s mastery of society portraiture. At the same time Boutet de Monvel continued to work in watercolor and illustration as well as color etching. Beginning in 1907, he participated frequently in the Carnegie Institute International Exhibitions in Pittsburgh, laying the foundation for his American reputation. In 1912, the Art Institute of Chicago hosted a retrospective exhibit of his etchings. In that same year that he took a position in Paris at the Gazette du Bon Ton, where he produced humorous drawings and fashion illustrations in a strongly linear style that would become his trademark. In 1915, he sent two works to the Panama-Pacific International Exposition in San Francisco.

Bernard de Monvel’s early career was characterized by a great deal of energy, numerous exhibitions, and a very wide focus including print and popular media. Although trained in academic practices, like his father, he chose not to follow a narrow academic path. His work reflected a variety of stylistic influences and he moved easily among the worlds of high culture, high style, and high society. Notably, in 1909, he began to employ a “rectilinear” composition mode characterized by the use of the ruler and compass in his drawing. This placed him among the earliest of the developers of what evolved into Art Deco. Boutet de Monvel’s work as a fashion illustrator, particularly for the famed Parisian couturier Paul Poiret, further lent itself to a modern, streamlined style that was an aggregate of interrelated geometries.

World War I brought this phase of de Monvel’s career to a dramatic halt. From 1914 to 1917, he gave up art. Stationed in Fez, Morocco from 1917 to 1919, his commanding general encouraged him to resume his career as an artist. In North Africa, Boutet de Monvel painted a series of views of Fez, Rabat, and Marrakesh, reinterpreting landscapes, architecture, and people in a stripped-down style that departed from the familiar visual language of nineteenth-century Orientalism.

After the War, Boutet de Monvel returned to Paris and to his busy practice as an artist and decorator.  In 1919, he joined with his wartime friend, the architect Louis Süe, and was among the founders of La Compaignie des Arts Français, an architectural and interior design firm dedicating to producing simplified and modern buildings and interiors in the tradition of the combination of fine and decorative arts pioneered in 1861 in England by William Morris and his circle. Throughout his career, Boutet de Monvel recorded himself in a series of self-portraits, most notably perhaps in a striking canvas of 1932 where he appears as a dandy and man-about-town, seated against the backdrop of the Place Vendôme. He did as well for his portraiture clientele, among them Bobby Jones, the golfer; the Maharajah of Indor and his wife; the general manager of the Citroën motor company; Mrs. Payne (Helen Hay) Whitney; Lady Charles Mendel; Elsie de Wolfe; and Mrs. Millicent Rogers (in a spectacular Charles James gown). These forerunners of the international jet set, he recorded amidst the settings most congenial to their glittering lifestyles—hunting, polo, golf, riding, evening glamour, palatial residences.

As with many of the French tastemakers of his generation, Boutet de Monvel was drawn to the speed, the dash, and the wealth of America in the 1920s, as embodied in New York City. He made his first trip to the United States in 1926, on the occasion of an exhibit of his oil paintings at the Baltimore Museum of Art, and visited regularly thereafter. To fill the gap when the Great Depression of the 1930s diminished his portraiture business, Boutet de Monvel continued with fashion illustration and advertising work. Inspired by the soaring linearity of the modern skyscraper as well as the austere geometry of the industrial landscape, he produced, in the 1930s, a series of beautifully realized, totally accomplished precisionist drawings and paintings unlike anything else in his oeuvre. The artist was said to dislike hotels. By 1936, he was a regular enough visitor to decide to build an American home. Boutet de Monvel chose Palm Beach, Florida, a strategic decision that offered him a society whose interests and habits meshed ideally with his own, and provided a constant source of patronage. He commissioned a noted architect, Maurice Fatio, to build a unique home whose octagonal great room radiated spokes of four rectangular wings, each separated by landscaped patios. In recognition of the unusual configuration and the whimsy it involved, the artist named his house La Folie Monvel. Much photographed, the house survived until 1990. Boutet de Monvel chose to spend the years of World War II with his wife, Delfina, and daughter, Sophie, in Paris, where he concentrated on painting the bookstalls along the River Seine. He resumed his career after the War, but died in a plane crash in the Azores in 1949 on his way to America.