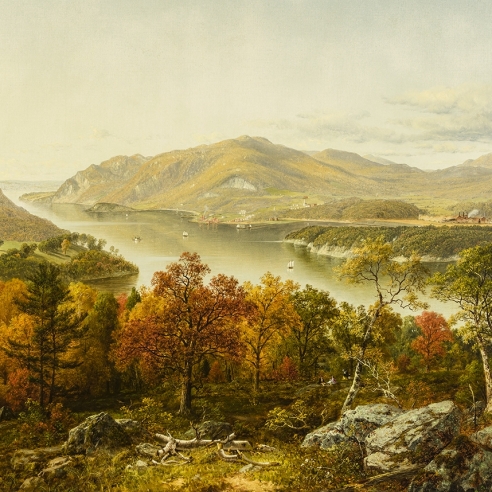 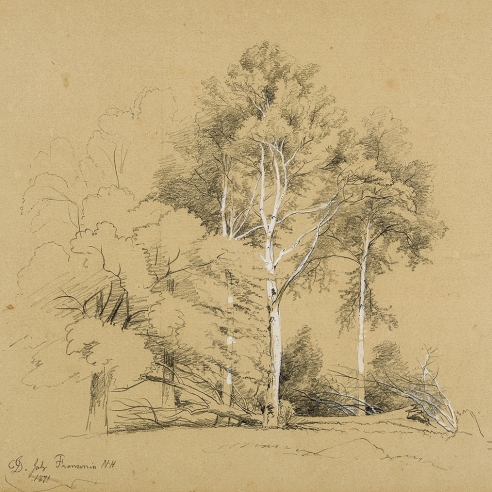 David Johnson was a stalwart of the New York art world in the second half of the nineteenth century. In the fifty years between 1849 and 1899, Johnson exhibited over fifty paintings at the National Academy of Design, where he was an academician.

Born in New York City to David and Eliza Johnson, his father was a builder of mail coaches. Johnson attended public schools and had minimal art training. According to the archives at the National Academy of Design, Johnson registered in the Antique Class there in 1845 and 1846. Johnson began his professional career in 1849, categorized by the company he kept and choice of subject matter and style as a second-generation Hudson River School painter. In 1849, he sketched in the Catskill Mountains with fellow New York artists John Frederick Kensett (1816–1872) and John William Casilear (1811–1893). He exhibited in New York in 1849, both at the annual exhibition of the National Academy of Design and with its rival, the American Art-Union. In 1850, Johnson studied briefly with Jasper Francis Cropsey (1823–1900). It is said that Johnson studied with his older brother, Joseph Hoffman Johnson (1821–1890), a portrait painter about whom even less is known than about his younger brother. Joseph Johnson was the maker of the portrait that David Johnson contributed as his required image for associate status at the National Academy of Design in 1860.

By his own account, in 1869, David Johnson married Maria Louise West. The couple lived at various locations in Manhattan, generally moving uptown, and last living on West 131st Street in the Manhattanville neighborhood, until they left for Walden, New York in 1904. Johnson likely had longstanding ties with Walden, a Hudson River Valley community in Orange County, north of New York City. For over twenty years, Johnson maintained a studio in the YMCA building on East 23rd Street, a location popular with artists not least for its strategic location across the street from the headquarters of the National Academy of Design.

Johnson’s early work reflected the growth of an American school of art, dedicated to the proposition that American scenery was a suitable subject for a national art. In summer these artists traveled, often in groups, to scenic locations where they created a body of drawings and oil sketches to turn into fully realized paintings in their winter studios. The accurate portrayal of flora, rocks, and water was a point of pride. In the period after the Civil War Johnson selectively incorporated influences from the Barbizon school of French landscape painting, moving back and forth between his earlier precise descriptions of nature and moodier, but evocative renditions of American northeastern scenery.