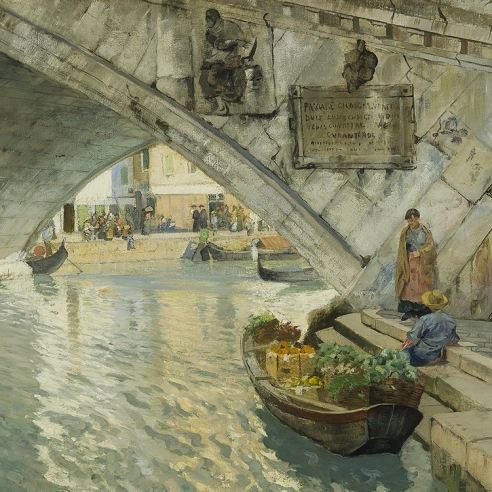 The brother-in-law of Paul Gauguin and good friend of Claude Monet, Norwegian painter Frits Thaulow began his artistic studies at the Academy of Fine Arts in Copenhagen, which at the time specialized in marine painting. Thaulow had hoped to become a marine painter, but he soon realized the limitations of such a specialized field and concentrated instead on landscape painting. He apprenticed with Norwegian landscape painter Hans-Fredrik Gude in Karlsruhe, Germany, for two winters before leaving for Paris in the early 1870s. Paris, cosmopolitan center and mecca for art students of all nationalities, boasted a sizable population of expartriate Norwegian artists, which Thaulow soon joined. It was through these artists that Thaulow was exposed to plein-air painting, which subsequently became the operative influence on his work for the rest of his career. His style followed that of the French realist painters, particularly exemplified by Jules Bastien-Lepage, more than the Impressionists, although he shared the same concerns with color and light as his Impressionist contemporaries. He exhibited frequently, contributing pictures to the Paris Salons from 1877 through 1880, and became a familiar figure in the Parisian art world.

Upon his return to Norway in the 1880s, Thaulow was acclaimed as Oslo’s foremost painter, noted primarily for his scenes of historic Oslo and the surrounding countryside. Thaulow, though, was a relentless traveler, and, as his varied landscape paintings attest, traveled far afield from his native Scandinavia to Germany, Great Britain, the United States, France, and Italy. Thaulow spent the summer of 1885 painting the environs of Venice, and exhibited to great acclaim five Venetian scenes, including the present canvas, in Oslo later that year. Venice proved enough of an attraction that Thaulow revisited the city in 1897 and again in 1899.

In addition to expanding his reputation as a painter, in the 1880s Thaulow also was active in Oslo’s art world. He arranged the Autumn Exhibition in 1882, and chaired the Artists’ Club in 1883. He helped to found the progressive Artists’ Union in 1885, and served as its president in 1887–88. During this time he advised his young cousin, Edvard Munch, and helped him weather the effects of an unreceptive public. By the late 1880s, Thaulow strengthened his ties to France. He was friends with Auguste Rodin, Pierre Puvis de Chavannes, Jean-Louis-Ernest Meissonier, and Émile-Auguste Carolus-Duran. He was also close friends with Claude Monet, and encouraged the great French Impressionist to travel with him to Norway to paint snow scenes in 1895, by which time Thaulow had become a permanent resident of France. In 1898, Thaulow was recruited by Andrew Carnegie to serve on the jury of one of the international exhibitions of the Carnegie Institute, Pittsburgh, Pennsylvania. On his trip to America, Thaulow visited New York, Washington, D.C., and Boston, and painted a number of works depicting American scenery.