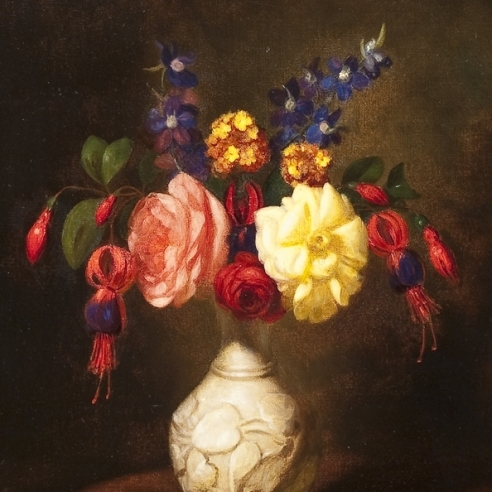 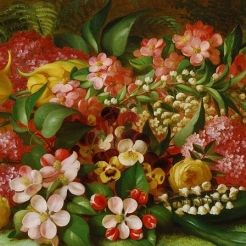 George Henry Hall, a popular and highly esteemed American artist, was, was born in Manchester, New Hampshire, and raised in Boston, Hall began his career as a self-taught portrait and genre painter, working in Boston from 1842 to 1849. He first exhibited at the Boston Athenaeum in 1846 and showed there regularly through 1868. In 1848, Hall extended his patronage horizon to New York City, selling three pictures to the American Art-Union. He began, as well, a mentoring correspondence with Andrew Warner, the influential Corresponding Secretary of the Art-Union. Hall was eager to travel to Italy to hone his professional skills. Warner, the son of a German-born father, urged Hall, instead, to go to Düsseldorf, whose art academy had begun to attract young Americans. Warner’s advice prevailed. Emanuel Leutze, a German-born American artist with strong ties to the Art-Union, had been among the first Americans to go to Düsseldorf, arriving in 1841. Richard Caton Woodville, another protégé of the Art-Union, studied in Düsseldorf in 1845–46. In 1849, John Godfrey Boker opened his Düsseldorf Gallery in New York City, putting the merits of the German school front and center before the American art public. More than offering just encouragement,  in 1849 the Art-Union (presumably with Warner’s warm advocacy) subsidized Hall’s German study with the purchase of seven paintings. Hall traveled to Europe with his good friend, Eastman Johnson, who, at Hall’s urging, also solicited patronage from the Art-Union, and was rewarded by the purchase of two of his crayon drawings. Hall and Johnson sailed for Europe in August 1849, landing in Antwerp before making their way to Düsseldorf.

Disappointed by the German academic style in Düsseldorf, Hall remained for a year before he moved to the more congenial art centers of Paris and, at last, Rome.  The Art-Union ceased operations in 1852, the same year that Hall returned to New York and settled there. In 1853, he began to exhibit European-inspired genre and figure paintings (along with an occasional portrait) at the National Academy of Design, where he was elected an associate academician.  In 1857, Hall showed Sweet Peas: A Study from Nature at the N.A.D. and A Study of Sweet Peas at the Boston Athenaeum, the first records of his exhibiting the still-life subjects for which he was to become well-known. As the subtitle “A Study from Nature” indicates, Hall’s early still-life work was influenced by the painting aesthetic of “truth to nature,” the rallying cry of the English art critic and arbiter of taste, John Ruskin. Hall’s still-life paintings of the 1850s and 1860s, precisely drawn and carefully colored evocations of fruits and flowers, reflect his own adaptation of the style of the American Pre-Raphaelites.

Hall exhibited energetically throughout his career and maintained a steady presence in the major annual exhibitions of his day. In addition to The Boston Athenaeum, the American Art-Union, and the National Academy of Design, he sent paintings to the Pennsylvania Academy of the Fine Arts, Philadelphia, from 1853 on; the Brooklyn Art Association, New York, from 1861; The Boston Art Club, in 1881 and 1889; the Art Institute of Chicago, in 1888; and in London, at Grosvenor Gallery, from 1889 to 1890. In 1868, he was elected an academician of the National Academy of Design, taking an active role there as treasurer and as a frequent member of the governing council. He was also a member of the Century Club in New York City from 1863 until his death in 1913, exhibiting upwards of 250 pictures on its walls, where they were seen by friends and colleagues who constituted New York’s artistic and literary elite.

In the 1860s, Hall concentrated on still-life painting, encouraged, no doubt, by the ready market he found for his work. The Cosmopolitan Art Journal singled Hall out in a March 1860 article, “The Dollars and Cents of Art,” noting the handsome prices the artist was receiving for his still-life paintings. Like a number of American artists, Hall periodically sold groups of his canvases in consolidated sales in order to raise money for foreign travel. In 1860, for example, Hall offered 143 paintings, many of them works that he had exhibited at the National Academy of Design, which realized sufficient money to support him in Spain for a number of years. Though he traveled frequently overseas and often for lengthy stays, Hall put down two sets of roots at home: in the Tenth Street Studio Building from 1874 through 1883, and in Palenville, New York from about 1867 until his death. The Studio Building on West 10th Street in Greenwich Village, was the center of New York City art life. When Hall made Palenville his summer and autumn home, it had already been an artist’s colony for more than 25 years.