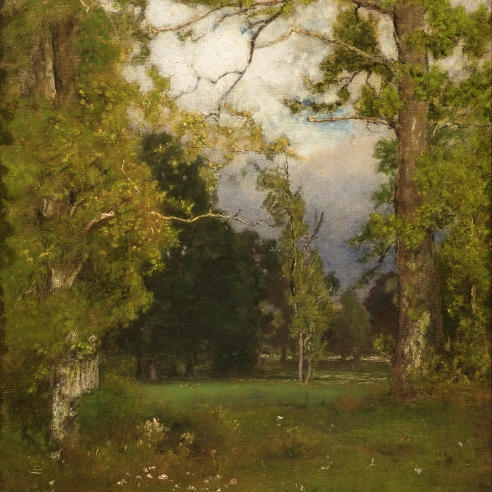 George Inness was one of the greatest American landscape painters of the nineteenth century. Born in the Hudson Valley in 1825, Inness grew up in New York City and Newark. He first studied with John Jesse Barker and the French-born painter Régis François Gignoux, but the largest early influence on his work was the ordered and idealized art of the seventeenth-century French landscape master Claude Lorrain. Like Lorrain, Inness depicted what he called “civilized landscapes,” rather than the wilderness views of Hudson River School artists. His 1851–52 and 1853–54 trips to Europe exposed him to English Pre-Raphaelitism, which he incorporated into his style during the 1850s, and to the French Barbizon School, which influenced his work beginning in the 1860s. After a long period of disapproval from critics, Inness’s work began to be appreciated for its poetic and expressive tendencies. A third trip to Italy and France from 1870 to 1875 introduced new compositional schemes, stronger color, and freer brushwork into his paintings. These developments laid the foundations for his late style of the 1880s and 1890s, when he was widely recognized as America’s leading landscape painter.

Physically frail, emotionally volatile, but unmistakably brilliant, Inness embodied the Romantic figure of the mercurial genius. His instability may have contributed to his constant stylistic development over a fifty-year career, which in its diversity of styles and influences is unparalleled in American art. His art is also unusual for its theoretical underpinnings and its emphasis on abstraction, which becomes apparent in later works influenced by his adherence to Swedenborgian mysticism. The theoretical complexity of Inness’s art, however, does not detract from its formal beauty and evocative moods.