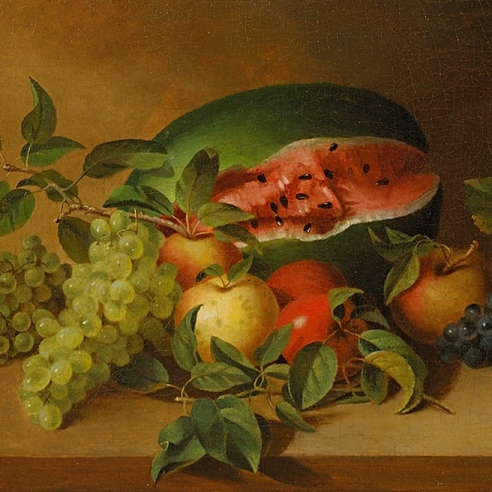 James Peale was the baby of the Peale family, a circumstance that defined him in life (though there is no indication that he chafed at it) and continued to circumscribe his artistic reputation long after his death. He was first apprenticed, as a 13-year-old, to his older brother, Charles Willson Peale, to learn to be a saddle-maker, a trade that both Peale brothers soon abandoned. In 1765, James was again apprenticed, this time to a carpenter-cabinet maker. But, in the end, he was destined to return for vocational instruction to his eldest brother. In 1769, when Charles Willson Peale returned to Maryland from England, whence he had been sent for further professional instruction by local patrons impressed with his native ability, he determined to teach both of his brothers to draw. Charles’s younger brother, St. George Peale (1745–1778), showed an aptitude for art, but he was already launched upon a promising career as a civil servant in Maryland, and did not live long enough to reconsider his choice. James, in contrast, became his brother’s studio assistant, turning his woodworking skills to the tasks involved in frame-making. Exhibiting the family talent for drawing, he went on to become a painter and a professional partner to his older, very enterprising brother. While it was a common refrain of American artists who aspired to the “higher” calling of history painting—John Singleton Copley, John Trumbull, and Samuel F. B. Morse, in particular—that portraiture was what one did to earn a living but not to earn esteem or a lasting reputation, the Peales were able and amply willing to serve as portrait-chroniclers to a young America.

James Peale is best known for his portrait miniatures, the niche to which Charles Willson assigned him in October 1786, when the brothers turned seriously to portraiture to tide them over in a financially stressed period. After this time, Charles Willson painted few miniatures, as James Peale assumed responsibility for this portion of the brothers’ portrait practice.

James Peale fought with the Maryland brigade of the Continental Army during the Revolution, where he saw service in the battles of Long Island, White Plains, Trenton, Brandywine, Germantown, Princeton, and Monmouth, attaining the rank of captain before he returned to civilian life in 1779. He remained a lifelong member of the Maryland chapter of the Order of Cincinnatus.

Despite his specified assignment as the family painter of miniatures, James Peale proved, in the course of a long career, to be a versatile artist, producing a varied oeuvre of first-rate work in history, landscape, and still life, as well as full-size portraits.