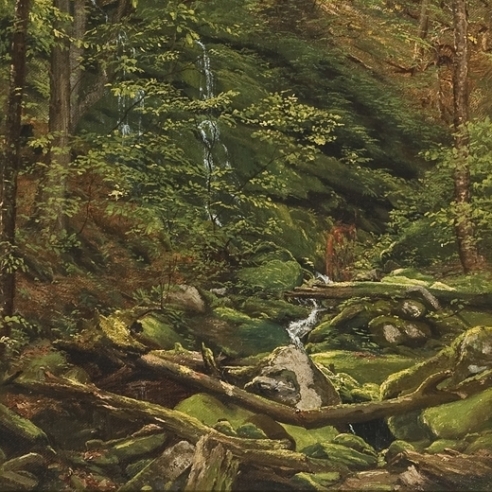 Jervis McEntee was born at Rondout (Kingston), Ulster County, New York, on July 14, 1829, to parents of Irish-Huguenot ancestry. A cultivated boarder in the family home, Mr. Henry Pickering of New York, first exposed the boy to art and literature. From 1852 to 1855, McEntee engaged in the flour and feed business in Rondout, which turned out not to be his true calling. In 1854, he married Gertrude Sawyer. McEntee began his long relationship with the National Academy of Design in 1850, when he exhibited a landscape view near Rondout in the Annual Exhibition. From 1852 through 1890 the artist exhibited every year at the Academy. He was elected an Associate in 1860, a full Academician in 1861, and thereafter took an active role in Academy affairs. In 1858, McEntee rented space in the West 10th Street Studio Building where he painted every winter until his death. An 1866 magazine article described the early years of McEntee’s career. The artist had “contended with those obstacles which keep guard at the door of success in every profession. Since 1860, however, Mr. McEntee has ranked with the best American landscape-painters, adding each year to his skill and to his reputation. . . . Mr. McEntee’s winter studio is in the Tenth-Street Building, New York, and is particularly rich in studies and sketches, chiefly of autumn scenery among the Catskills and the Adirondacks, though he has not confined his wanderings to those localities.”

During the Civil War McEntee joined his friend Sanford Gifford in volunteering for the New York State Militia. In 1863, he and Gifford spent three months in Europe. In 1867, McEntee sent three works to the American section of the prestigious Paris Exposition. McEntee and his wife went to Europe in the summer of 1868 and remained for about a year. The artist traveled first to England, where he was influenced by seeing the work of Joseph William Mallord Turner. Proceeding on to Paris, through France and into Italy, McEntee reunited in Rome, with his friend, Gifford. He rented a studio in the same building as his old teacher, Frederic Church, and William S. Haseltine. McEntee collaborated with Church and another American, George P. A. Healy, to paint The Arch of Titus (1871, Newark Museum), which shows the three painters sketching and the poet Henry Wadsworth Longfellow and his daughter passing under the historic arch. In 1876, McEntee showed ten paintings at the Centennial Exhibition in Philadelphia, winning a commendation for “excellence in landscapes.” Poetry provided the themes for many of McEntee’s paintings and he was particularly inspired by the work of William Cullen Bryant. In a letter to Bryant’s daughter on the occasion of her father’s death in 1878, McEntee wrote: “What little I have been enabled to accomplish in Art has been largely due to him. I have always loved to paint from his suggestive verse and I strongly feel that the years as they go by will strengthen and hallow in my soul the gentle influence which he early planted there.”

In summer 1881, McEntee went west to visit his sister and her husband, who held the command of Fort Halleck in Nevada. Though he professed himself much impressed by the western scenery and subsequently painted a few western scenes (and also a few Mexican views indicating, perhaps, an additional trip), unlike Albert Bierstadt and Thomas Moran, he was not converted to the school of grand spaces.