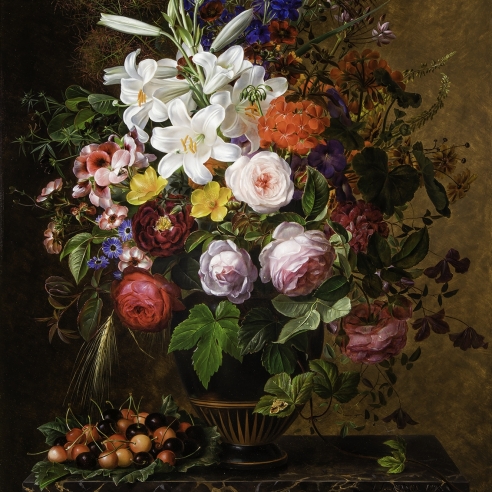 Johan Laurentz Jensen was the leading painter of floral still lifes in Denmark in the first half of the 19th century. As a young man, he studied at the Academy under Christoffer-Wilhelm Eckersberg and C. D. Fritzsch. In 1821 Jensen decided to devote himself entirely to flower painting, and in 1822 Prince Christian Friedrich suggested study at Sèvres, where he remained for four months.  Upon his return from Sèvres, Jensen was then appointed principal painter at the Royal Copenhagen Manufactory. Among the projects he supervised was the 1836 wedding service for Princess Alexandra and the Prince of Wales, a set which used the "Flora Danica" scientific illustrations of native plants.

From 1833 to 1835 Jensen lived in France and Italy; while in Rome, he was considered the most prominent painter in an extensive colony of Scandinavian artists there. In 1845 he visited Paris and Holland.  Throughout his career he exhibited regularly at the annual Charlottenberg exhibitions and at the Exposition Universelle in Paris. His works were admired and collected by his friends Bertel Thorvaldsen and Hans Christian Anderson.  It was these accomplishments which led to Jensen's reputation as the "Father of Danish Flower Painting" and his status as the most outstanding still life artist of the Danish Golden Age.