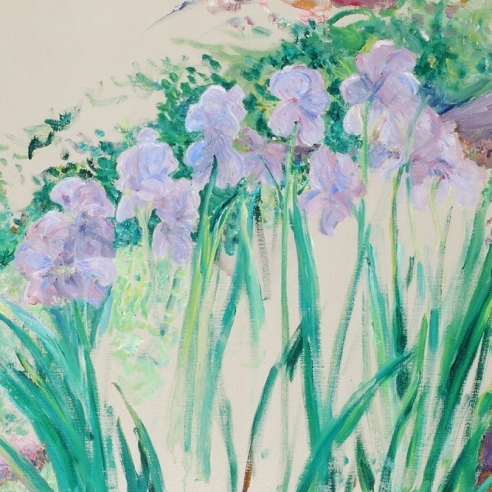 A painter who played a key role in the dissemination of Impressionism in Boston, Lilla Cabot Perry was a scion of one of the city’s most distinguished families. The eldest daughter of the surgeon and abolitionist Samuel Cabot, Lilla was brought up to appreciate the arts, socializing with literary figures such as Ralph Waldo Emerson and Louisa May Alcott, and visiting libraries and museums such as the Boston Athenaeum. After attending boarding school, Lilla studied at Miss Clapp’s private school for girls, where she acquired fluency in French and German. By the age of seventeen, she had also developed an interest in painting. On visits to the family farm in Canton, Massachusetts, Lilla acquired an affinity for nature that would in turn inspire her later work as a landscapist.

Lilla’s position as a leading New England Brahmin was further enhanced in 1874, when she married Thomas Sergeant Perry (1845–1928), a noted literary critic, linguist, and Harvard alumnus whose impressive lineage harked back to Commodore Matthew Perry (his great-uncle) and Benjamin Franklin (his great-great grandfather). Thomas was also the brother-in-law of the painter and stained- glass designer John La Farge.

The Perrys went on to have three daughters: Margaret (1876–1970), Edith (1880–1958), and Alice (1883–1959). However, notwithstanding the demands of motherhood and managing a household, Lilla was determined to become a professional artist, a decision that was prompted by the family’s need for additional income as much as by her love of art. She began painting in her spare time during the late 1870s, but remained self-taught until the mid-1880s, when she received critiques from the painters Alfred Quentin Collins and Robert Vonnoh. This was followed by a period of study under Dennis Miller Bunker at the Cowles Art School in Boston, an experience that helped prepare Perry for the next phase of her aesthetic development. In 1887, Thomas Perry and his family embarked on a two-year sojourn to Paris, thereby providing Lilla with the opportunity to attend life classes at the Académie Colarossi and the Académie Julian. She also made visits to the Louvre, sometimes accompanied by the critic Bernard Berenson, a friend of her husband’s. Lilla also had the opportunity to copy the paintings of Velásquez while touring Spain, and during a visit to Munich she worked under Fritz von Uhde, whose portraits of children would set an important example for her later figural work.

Perry initially painted in an academic realist style, favoring a traditional low-keyed palette. In the spring of 1889, she made her professional debut at the Salon des Artistes Français, exhibiting portraits of her husband and daughter Edith. Following this, Perry gained admittance to the studio of Alfred Stevens, a painter known for his depictions of genteel ladies in well-appointed interiors. While Stevens’s work would exert a major influence on the artists of the Boston School, his impact on Perry was minimal in comparison to what came next. After viewing an exhibition of Claude Monet’s paintings at the Galerie Georges Petit (Perry described the experience as a “revelation”), she and her family decided to spend the summer of 1889 in Giverny, the Norman village about 45 miles northwest of Paris that had recently emerged as a seasonal haunt for American painters. While Giverny provided plein-air artists with an abundance of landscape motifs and a convivial atmosphere in which to live and work, the real attraction was Monet, who settled there in 1883. Although the father of French Impressionism willfully ignored the colonists, he befriended Perry and exhorted her to paint in the open air.

Perry subsequently adopted the broken brushwork and bright colors that characterized Monet’s style of the late 1870s and early 1880s, applying those methodologies to views of brooks and meadowlands, as exemplified in works such as Landscape in Normandy (1890; Newark Museum, New Jersey). However, like most American painters of her milieu, she modified her approach when rendering the figure, combining the lively hues of Impressionism with her lingering concern for a solid rendering of the human form. This strategy can be seen in early canvases such as La Petite Angele, II (1889; private collection), in which Perry inaugurated what would become one of her signature themes––that of a young girl seated beside a window. (In adopting this motif, Perry was likely influenced by the example of the aforementioned Von Udhe, who often included doors and open windows in his figure paintings.)

Upon returning to Boston, Perry brought her enthusiasm for Monet and Impressionism back with her, promoting the Frenchman’s work to local collectors and helping arrange an exhibition of Breck’s impressionist landscapes at the St. Botolph Club. Between 1891 and 1909, she made nine additional visits to Giverny, including an extended trip from 1894 to 1897, during which time the Perrys divided their time between various apartments in Paris and Le Hameau (The Hamlet), a large farmhouse in Giverny that was situated directly next door to Monet’s home and gardens. As in her prior visits, Perry and Monet resumed their friendship. The only other American colonist who has access to Monet, besides his son-in-law Theodore Earl Butler, was Theodore Robinson. In addition to Monet, Perry also became friendly with another major impressionist––Camille Pissarro, who lived in nearby Eragny.)

As well as being the first American woman to live and work in Giverny, Perry also broke new ground through her activity in Japan. In 1898 Thomas was appointed a professor of English literature at Keiogijiku University in Tokyo. During the next three years, Perry painted over eighty outdoor landscapes and scenes of local life. During her later years, she divided her time between Boston, where she painted portraits of members of the upper-class, and the family farm in Hancock, New Hampshire, where she depicted the local countryside under a blanket of snow. Like other members of the Boston School, Perry shunned the avant-garde art that was featured at the Armory Show of 1913.

Perry exhibited widely both in the United States and Europe but she was largely forgotten in the wake of her death in Hancock in 1933. Her role in the history of American Impressionism was first brought to the attention of contemporary art audiences in 1969, when a retrospective exhibition of her work was held at Hirschl & Adler Galleries.