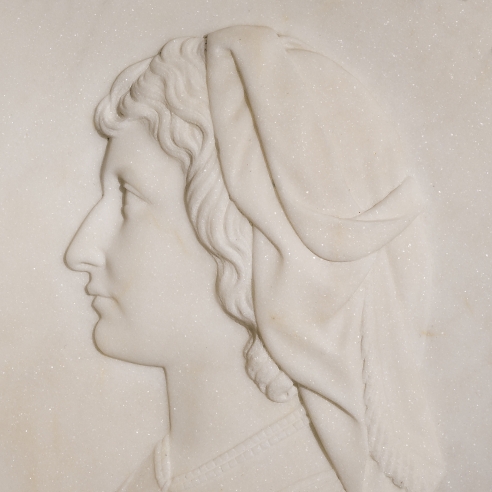 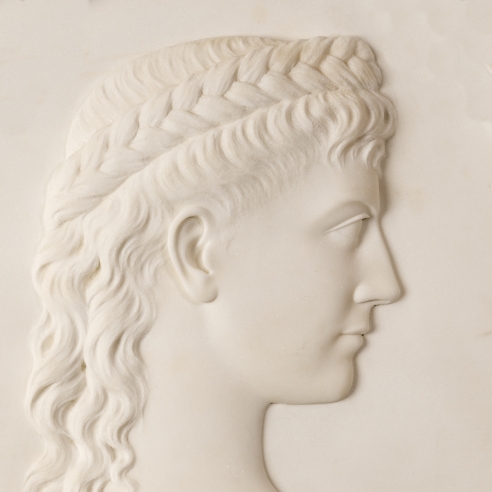 In 1861, the 34-year-old Margaret Foley embarked on a sculptural path that led to Italy, the sine qua non of pursuing a serious career as a Neo-Classical sculptor. She arrived in Rome in company with Charlotte Cushman, a Boston native, and Cushman’s wife, Emma Stebbins, a Neo-Classical sculptor who hailed from New York City. An artist in her own right as an internationally acclaimed Shakespearean actor, Cushman was the matriarch of the Roman female artist’s community. She deliberately fashioned her comfortable home as the welcoming center, meeting place, and social salon of the American female artists’ community. When Foley first arrived, she stayed with Cushman, was warmly greeted by Harriet Hosmer (1830–1908), already established as a sculptor in Rome, and was invited to share Stebbins’ studio.

Rome was notable for the educational, social, and financial opportunity it offered to women determined to achieve careers in art. It was, for Foley and her circle of American women, the only place in the world that offered the opportunity to live and work as independent professional female artists. It was this group that Henry James memorably—and perhaps somewhat dismissively—described as “…that strange sisterhood of American ‘lady sculptors’ who at one time settled upon the seven hills [of Rome] in a white marmorean flock.”

Margaret Foley thrived in Rome. She enjoyed a successful career, was highly regarded by her fellow artists, both male and female, and received a series of positive notices in the contemporary art press. Surrounded by a devoted circle of friends, she worked diligently. Unlike some of her colleagues, Foley appears to have been disinclined to behavior that might have attracted wider public attention She never entirely gave up the cameos and portrait medallions that undergirded her financial stability. Thus, much of her characteristic work was done for private patrons and remains in private hands, rarely appearing on the art market. From a young age, she suffered from unspecified chronic health issues which led to intermittent periods of convalescence. Her major American public commission, a marble fountain for the Horticultural Hall at the Philadelphia Centennial Exposition of 1876, was well received, but prospects for a more visible career were cut short by her early death in Europe in 1877 at the age of fifty. Foley thus remains among the lesser known of her Neo-Classical sculptor compatriots.

Foley was born in Vermont or New Hampshire, or maybe Canada. She attended school in Vergennes, Vermont, where her talent as a student led directly to a teaching position. As with other artists, Foley’s gifts were apparent from her earliest days. She whittled and carved and attracted the notice of admiring locals. The difference for Foley, of course, is that she was female, and the options open to her for pursuing a career as an artist were therefore severely constricted. Despite being a beloved teacher, by all accounts, Foley determined that she would have to leave Vermont in order to be an artist. She went to Lowell, Massachusetts, where she took a position working in a textile mill, which gave her the opportunity to hone her skills and earn a living in relative proximity to the cultural center of Boston.

Foley saw her first cameo while she was still living in Vergennes. Deciding that she could cut cameos if only she knew how, she sought out a cameo maker in Boston for instruction, Foley enjoyed early success with her cameos. Foley was sculpting miniature profile medallions by 1848 and had already moved from Lowell to Boston to work as a cameo cutter. What emerges from Foley's patchwork biography is a picture of a woman doing whatever looked most promising as a means to her end. She worked in the mills. She studied and taught art. She appears to have lived in Boston for a while and then returned to Lowell where there was more opportunity to earn and, with a lower cost of living, save money. She may have returned briefly to full-time school teaching. She contributed poetry to a magazine issued by female workers in the mills, The New England Offering. In 1859, E[lizabeth]. F. Ellet, described Foley as “a member of the New England School of Design [who] gave instruction in drawing and painting. She resided in Lowell, and was frequently applied to for her cameos, which she cut beautifully. It was her skill at making cameo likenesses, working in shell and lava, that finally gained Foley sufficient income to support herself as an artist. In 1860, she exhibited cameos at the Boston Athenaeum. But Foley’s ambition extended beyond cameo cutting. In 1859 and 1860, she contributed articles to The Crayon, a highly respected art journal. By 1861, encouraged by Boston friends, she took her carefully gathered $400 in savings and headed to Italy.

The personal qualities that enabled Margaret Foley to transform herself from a small-town New England school teacher to a Boston sculptor proved equally effective in Rome. As Foley set about establishing herself, she continued to produce cameos and medallions for a succession of patrons who prized her work. Through her friendship with Harriet Hosmer, she met John Gibson (1790–1866), the eminent Welsh Neo-Classical sculptor resident in Rome, who had earlier mentored Hosmer. Gibson was a member of the Royal Academy in London and had initially been a protégé of the famous Neo-Classical Italian sculptor, Antonio Canova (1757–1822). Gibson was immediately impressed with Foley’s work and offered her encouragement and guidance. Foley carefully positioned herself to be able to produce ideal pieces as well as portraits. From her vantage point in Rome, Foley managed an active schedule of international exhibitions, sending marble busts and bas-reliefs to London, Dublin, and Paris, as well as New York City and Philadelphia.

By 1872, Margaret Foley owned her own home and had, addition, two studios in Rome, one for sculpting, the other for exhibition. While Foley continued to be a favorite with Americans visiting Italy, she also developed an audience of appreciative English patrons. There were close ties between the American and English art and literary communities in Rome. Harriet Hosmer famously sculpted the intertwined hands of her friends, Elizabeth Barrett and Robert Browning (The Metropolitan Museum of Art, New York, 1853). Foley developed a filial relationship with a married couple, the English literary expatriates, William and Mary Howitt. The Howitts, a generation older, were prolific authors who had a wealth of connections to the English literary and art world, a number of whom became Foley patrons. It was Margaret Howitt (1839–1930), their youngest child, who eulogized Foley in the pages of The Art Journal in 1878. As Foley’s bouts of ill health, chronic since her days in Boston, increased after 1870, she spent summers with the Howitts in the resort area of the Austrian Tyrol (since the end of World War I, the South Tyrol, Italy). Foley died there in 1877 in the village of Meran (now Merano) and is buried in the Protestant Cemetery.