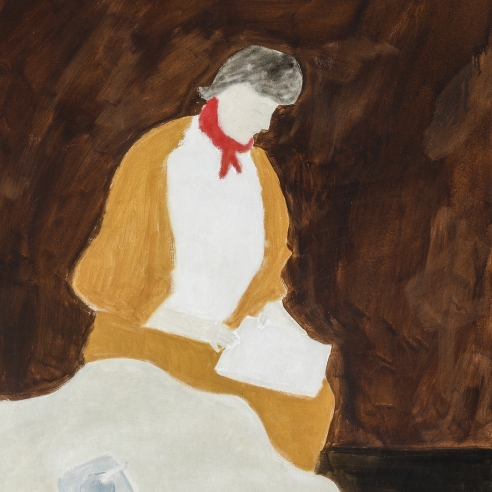 Born in Sad Bank (later Altmar), New York, Avery was a son of Russell N. Avery, a tanner, and his wife, Elizabeth. When Avery was thirteen, his family moved to Wilson Station, Connecticut, near East Hartford. In 1911, after working as an assembler, latheman, and mechanic at a local machine and screw company, and later, a typewriter factory, Avery enrolled at the Connecticut League of Art Sudents. Intent on purusing a career as a commercial artist, he decided to study lettering. However, when his course was discontinued after a month, Avery transferred to a life-drawing class, where he received instruction from Charles Noel Flagg, a key member of the Hartford art colony whose encouragement prompted his decision to become a professional artist. Avery remained at the Connecticut League of Art Students until 1918, when he transferred to the School of the Art Society of Hartford, studying portrait painting and refining his skills as a draftsman. Throughout this period, he spent his free time painting views of the meadowlands of East Hartford, working in a loose, impressionist-inspired manner with thick, impastoes surfaces. In 1915, Avery made his professional debut at the Wadsworth Atheneum, exhibiting his Glimpse of Farmington (about 1914; location unknown) at the museum’s Fifth Annual Exhibition of Oil Paintings and Sculpture. A pivotal turning point in his career occurred in 1924 when, on a visit to Gloucester, Massachusetts, he met Sally Michel (1902–2003), an illustrator and artist from Brooklyn who he married one year later. The couple went on to have a daughter, March (born 1932), who, like dark-haired Sally, served as a model for many of her father’s later paintings. (March Avery [Cavenaugh] went on to follow in her father’s footsteps by becoming a painter.)

Following his nuptials and subsequent relocation to New York, Avery painted full-time while Sally supported the family through her illustration work for books and publications such as the New York Times. In addition to working on his own, he attended evening sketch classes at the Art Students League of New York (1926–38) and fraternized with forward-thinking painters such as Jules Pascin, Walt Kuhn, Marsden Hartley, Mark Rothko, and Adolf Gottlieb. During these years, Avery also enhanced his familiarity with European vanguard art, viewing the work of painters such as Henri Matisse, Pablo Picasso, and Georges Braque at venues such as the Valentine Gallery. Taking his cue from their use of simplified forms and non-naturalistic color, Avery abandoned his former impressionist manner in favor of a more progressive technique, interpreting everyday subject matter––figures and playful genre subjects, as well as landscapes, seascapes, and still lifes drawn from his immediate environment––in terms of stylized or distorted shapes with little modeling and arbitrary color. He also adopted a thinner application of paint, as evident in works such as Winter Riders (1929; Phillips Memorial Gallery, Washington, D.C.) and Children at Seaside (1935; Milton And Sally Avery Arts Foundation).

In 1928, Avery had a solo exhibition of his watercolors at the Frank K. M. Rehn Gallery in New York. He participated in numerous group shows as well, including an exhibition at the Morton Galleries in October 1929, at which time Duncan Phillips acquired Winter Riders for his museum in Washington, D.C. Avery’s reputation was further enhanced in 1935 when he joined the stable of artists associated with the Valentine Gallery, where his paintings were acquired by collectors such as Dr. Albert Barnes and Roy Neuberger. Although known for his gentle sense of humor, Avery was a quiet man who preferred painting to conversation. He lived a simple life with his family and, avoiding the usual trends and politics of the art scene, rarely talked about his own work. Avery also never went a day without creating a picture, whether ensconced in his New York studio or on a visit to one of his favorite summer haunts in Massachusetts, Vermont, and Quebec’s Gaspé Peninsula.

Avery remained with the Valentine Gallery until 1943, when he joined Paul Rosenberg & Company, one of the most prestigious galleries dealing in modern art. (Avery’s association with with acclaimed Rosenberg firm lasted until 1950, when he joined the recently established Grace Borgenicht Gallery.) One year later, he had a one-man show at the Phillips Memorial Gallery that propelled him into the national spotlight and led to additional solo exhibitions in other major American cities. By this point, Avery had arrived at his mature style. While retaining his long-standing interest in flat, reductive forms, he enlarged them, eliminating distracting anecdotal detail so as to achieve a greater degree of simplification. Avery also allowed color to play a dominant role in his painting, brightening his palette while emphasizing strong contrasts between light and dark hues, as in oils such as Pink Tablecloth (1944; Munson-Williams-Proctor Institute, Utica, New York). He began to dilute his pigments as well, applying them in thin layers, a process that, as Hilton Kramer pointed out, had the effect of dematerializing the picture surface in such a way that its “constituent elements seem to float directly into the observer’s eye”––a pictorial effect that would inspire later exponents of Color Field painting such as Morris Louis. Critics of the day were drawn to the unassuming and oftimes witty quality of Avery’s work, as well as the fact that his paintings were direct and charmingly naïve yet “sophisticated in the sense that Matisse ... [was] sophisticated ... with a most knowing distortion of shape” (Emily Genauer, “Milton Avery Gains in Stature,” New York World-Telegram, June 5, 1943). Commentators also acknowledged that although Matisse and Avery shared a love of decorative hues, reductive shapes, and a desire to convey their emotional response through form and color, they manipulated these devices according to their own backgrounds and sensibilities, the Frenchman adhering to bold chromatic schemes and lavish patterning to achieve his aesthetic goals, the Connecticut Yankee favoring a more restrained palette, sparse designs, and a greater degree of simplication; as a writer for the New York Times pointed out “one could never ... confuse the two” (Edward Alden Jewell, “Watercolors 1947: My Daughter, March,” New York Times, February 9, 1947).

In 1949, Avery suffered a heart attack. While recuperating in Florida, he began producing monotypes, a mode of printmaking that involved making an oil painting on metal, glass or stone in a quick and decisive way. As a result of his excursions into this medium, as well as the influence of the work of abstract expressionists such as Rothko and Gottlieb, Avery adopted a looser application of pigment in his later paintings. He also imbued them with a greater degree of abstraction, turning his attention to rigorous, well-balanced compositions and larger formats. Avery’s work from the 1950s and early 1960s also exudes a sense of tranquility that reflected the more introspective outlook he assumed during these years, when he became increasingly aware of the fleeting nature of time.