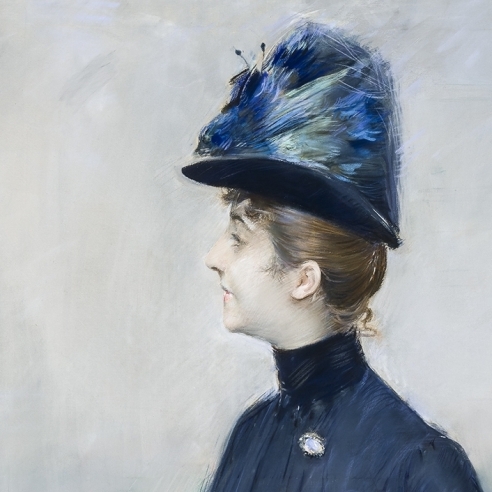 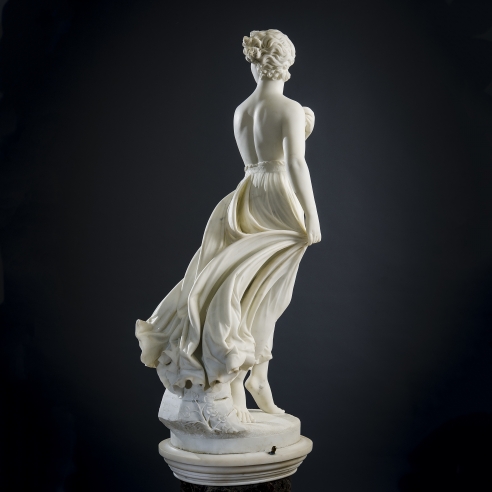 A talented and charismatic artist who won acclaim on both sides of the Atlantic, Paul César Helleu is best known for his etchings of Belle Époque women, attracting critical praise for his skill in evoking the grace and elegance of his subjects, and for his style, in which he conjoined a fluent handling of form with expert draftsmanship. Helleu was also a painter of landscapes, floral still lifes, and cathedral interiors, and, as noted by the English writer Frederic Lees, he gained considerable recognition as a “pastellist of great ability. The softness, freshness, and modelé which can be obtained by means of pastels made him an advocate of this medium long before he turned his attention to dry-point work, and he . . . [also] employs it in his portraits of fashionable ladies” (Frederic Lees, “Paul César Helleu: Etcher and Pastellist,” The Pall Mall Magazine 29 [January–April 1903], p. 297).

Born in Vannes (Bretagne), France, to a Parisian mother and a Breton father (both of them amateur artists), Helleu grew interested in drawing while attending the Collège Chaptal in Paris during the mid-1870s. Although his mother disapproved of his desire to pursue an artistic career, Helleu enrolled at the École des Beaux Arts in Paris in 1876, honing his skills as a figure painter under the tutelage of Jean-Léon Gérôme. A pivotal moment in his career occurred in 1877, when he met and became friendly with the American painter John Singer Sargent, who would later immortalize the Frenchman in his well-known oil, Paul Helleu Sketching with His Wife (1889; Brooklyn Museum, New York). (Sargent executed other portraits of Helleu too, including examples in the collections of The Metropolitan Museum of Art, New York; the Museum of Fine Arts, Boston; the Fogg Art Museum, Harvard University, Cambridge, Massachusetts; and the British Museum, London). During this period, Helleu also associated with a circle of forward-thinking artists that included Edgar Degas, Claude Monet, Auguste Rodin, Giovanni Boldini, Jacques-Émile Blanche, and James McNeill Whistler, but it was Sargent who gave him his earliest encouragement and support. Indeed, soon after they met, Sargent visited the impoverished Helleu in his tiny studio on Rue de la Grande Chaumière and purchased one of his pastels for a thousand francs; to Helleu, it “felt as if the heavens had opened . . . . Sargent had set him on his feet” (Evan Charteris, John Sargent [London: William Heinemann Ltd., 1927], p. 45). Sargent would later introduce Helleu to prospective clients, in addition to visiting his exhibitions.

Helleu initially made his living by painting plates for Joseph-Théodore Deck, a ceramicist with whom he also studied. In his spare time, he focused his attention on intimate portraits of lovely ladies, which he would go on to display at the Paris Salons and at annual exhibitions of the Société des Pastellistes. Indeed, Helleu took great delight in that medium, describing it as “the most beautiful thing you can imagine . . . The surface looks like velvet, the freshness and modeling they bring can be found in no other technique." In 1885, when the painter James Tissot provided him with a diamond stylus, Helleu decided to try his hand at etching. Lauded for his expert draftsmanship and use of free-flowing lines, he produced nearly two thousand drypoints of women that were avidly collected by French patrons, among them his first biographer, the poet and aesthete Count Robert de Montesquiou, who introduced Helleu to French society. (See Robert de Montesquiou, Paul Helleu: Peintre et Graveur [Paris: H. Floury, 1913].) As his standing rose in the art world, Helleu was much sought-after as a portraitist of women, executing commissions for such luminaries as the Duchess of Marlborough, the Countess of Greffulhe, and other members of the European aristocracy. His extensive network of social connections also included Marcel Proust, who used Helleu (along with Blanche and the painter Edouard Vuillard) as the inspiration for the painter Elstir in his seven-volume novel, Á le Recherche du Temps Perdu (1913–27). As he prospered and his link with female imagery continued to grow, Helleu also exerted an influence on women’s fashion, advising leading dress designers such as Charles Frederick Worth and Jacques Doucet. He also became known for his distinctive taste in interior design; avoiding the dark interiors of the day, he painted his stylish apartment in Paris entirely in white.

In addition to depicting beautiful upper-class women, Helleu produced many portraits of his beautiful wife, Alice, who he married in 1886. He also created likenesses of his fellow artists, among them Whistler, James Tissot, and Eugene Boudin.