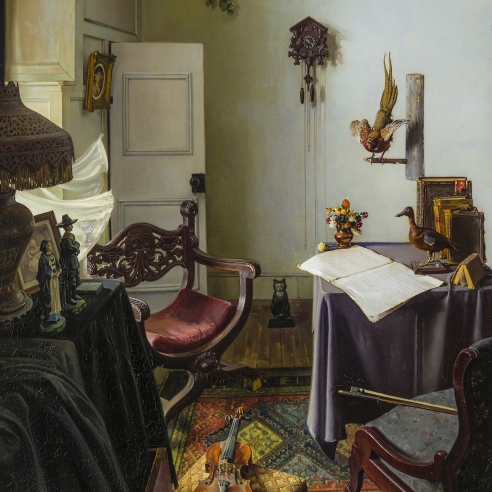 Born in Glen Ridge, New Jersey, Roberts was a daughter of Charles Asaph Roberts and his wife, Mary, an amateur painter. When Roberts was still a child, her family moved to New York, where her father was a partner at Cravath, Swaine & Moore, a prominent law firm. Her interest in art developed during her girlhood, when her mother compiled a scrapbook of advertisements from Good Housekeeping magazine to distract her while she recuperated from a bout of acidosis.

During the mid-1930s, Roberts spent a year studying at Radcliffe College before transferring to the Yale School of Art. In 1937, she enrolled in classes as the Art Students League of New York, working under the painters Charles Courtney Curran and Sidney Dickinson. Following this, Roberts honed her skills at the school of the National Academy of Design (1939–43).

Upon completing her studies, Roberts remained in New York, where she found work as a commercial artist. However, feeling constricted by the constant deadlines, she decided to become a full-time painter instead, going on to rent a studio in the Van Dyke building at 939 Eighth Avenue in the Hell’s Kitchen neighborhood. Intent on creating paintings imbued with personal and symbolic significance, Roberts turned her attention to meticulously rendered still lifes and interiors that, in their painstaking technique and careful manipulation of light, reflected the influence of the Dutch Baroque painter Jan Vermeer, whose work she admired at the New York World’s Fair in 1939.

Like other painters of her milieu who also worked in a precise representational style, such as Paul Cadmus and George Tooker, Roberts acquired a reputation as a Magic Realist. However, Roberts stood apart from her cohorts in that she imbued her paintings with a sense of enigma and quietude through her skillful handling of chiaroscuro and in her penchant for creating unorthodox groupings of ordinary, man-made objects, ranging from furniture, musical instruments, dolls, and candles, to old letters to clocks, hourglasses, figurines, and even death masks. Her highly detailed paintings depict an unreal and ofttimes ambiguous environment––sometimes haunting, sometimes playful––meant to elicit an emotional response in the viewer. A non-conformist who followed her own path in both her life and art, Roberts chose to ignore the label of “Magic Realist,” preferring to define her approach as an alternative aesthetic that she described as “Arch Realism.”

In the spring of 1946, Roberts joined Grand Central Art Galleries in New York, the legendary artists’ cooperative that would handle her work for the rest of her life. Two years later, seeking a respite from the bustle and bustle of the city, she settled in the Georgetown section of Wilton, Connecticut, where, as in New York, she would roam the local antique stores, thrift shops, and flea markets in search of objects and bric-a-brac for her paintings. In keeping with her independent spirit, Roberts lived alone and worked at her own pace, often taking over a year to complete a picture, as was the case with Plumage (1950; The Metropolitan Museum of Art, New York), which was a full fifteen months in the making. Although her paintings sold regularly, Roberts spent so much time creating them that she was not a prolific artist. It was not until 1961 that Grand Central Art Galleries had enough canvases to mount her first solo exhibition.

Robert exhibited intermittently in group shows in Pittsburgh, Washington, D.C., and elsewhere. In New York, she was a regular contributor to the annual exhibitions of the National Academy of Design, where she received the Julian Hallgarten Prize in 1947 and the Proctor Portrait Prize in 1969. In 1951, Roberts was elected an associate member of the Academy and six years later she became a full academician––the only woman accorded that honor during the 1950s. Roberts is represented at the National Academy of Design by Alchemy [1957]). In 1985, Roberts moved to Redding, Connecticut, one town west of Georgetown, where she died on August 5, 2001