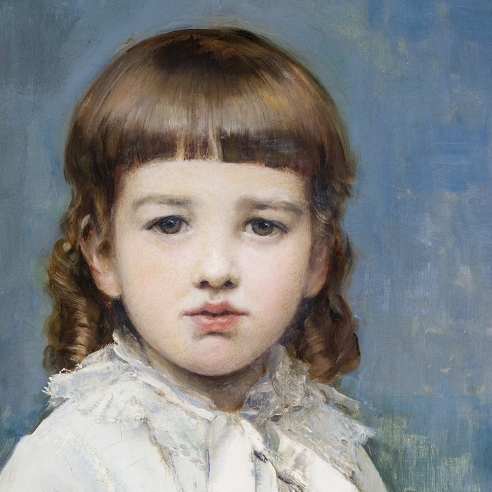 A celebrated painter who spent his career outside of his native Spain, Raimundo de Madrazo y Garreta acquired an international reputation for his spirited genre scenes and stylish portraits of high society clients from France, England, and Argentina. He was also one of the most important artists of the contemporary Spanish School to establish a foothold in the highly competitive portrait market of Gilded Age America.

Madrazo came from a long line of distinguished painters who descended from the Spanish nobility. Born in Rome, he was the son of Federico de Madrazo (1815–1894), the eminent portrait painter to Queen Isabella II and director of the Museo Nacional del Prado (1860–68; 1881–94), and the grandson of the Neo-Classical painter José de Madrazo (1781–1859). Madrazo was also the brother of Ricardo de Madrazo (1852–1917), who became a well-known painter of Orientalist subjects. The dominance of the Madrazo family in the history of nineteenth-century Spanish art was enhanced by the activities of other family members, too, among them Madrazo’s uncles, the painter Luis de Madrazo y Kuntz (1838–1894), and Pedro Madrozo y Kuntz (1816–1898), a critic. Madrazo was also the brother-in-law of Mariano Fortuny (1838–1874), the leading Spanish painter of the day whose colorful and vigorously painted genre scenes inspired American artists such as William Merritt Chase.

Madrazo received his initial art instruction from his father and grandfather, who taught him the key principles of academic painting, with its emphasis on solid draftsmanship and structured designs. Following this, he refined his skills at the Real Academia de Bellas Artes de San Fernando in Madrid, working under the painters Carlos Luis de Ribera and Carlos de Haes. In 1860, Madrazo went to Paris, studying in the atelier of the history and genre painter Léon Cogniet. He also familiarized himself with the latest trends in the Parisian art world art by visiting galleries and museums with his compatriot Martin Rico y Ortega, with whom he shared a studio. During this period, Madrazo also fraternized with the Belgian genre painter, Alfred Stevens, who specialized in depictions of fashionable ladies in interiors, and Giuseppe de Nittis, the Italian-born artist who painted scenes of daily life, including many images of women. He likewise became friendly with William Hood Stewart, an American sugar baron who settled in Paris in 1865 and went on to amass an important collection of European art. (Stewart’s son, the figure painter Julius LeBlanc Stewart, would later study privately with Madrazo.)

In contrast to his father and grandfather––Paris-trained painters who returned permanently to their homeland––Madrazo pursued a career trajectory that reflected the late-nineteenth-century emphasis on cosmopolitanism. Indeed, in 1862 he settled in the French capital, where he painted historical and religious themes executed in an academic realist manner. However, during the 1870s, inspired by the current fashion for genre scenes as exemplified in the work of Fortuny, Stevens, and others, Madrazo turned his attention to large-scale and highly vivacious courting scenes, as well as more intimate depictions of ladies in their boudoirs or in well-appointed interiors, where they engaged in leisure activities such as reading or playing a musical instrument. In keeping with his new thematic concerns, he also modified his style to suit the taste of the Parisian art world. Taking his cue from the example of Fortuny, he adopted a brilliant technique in which he synthesized his penchant for drawing with the painterly brushwork that had become increasingly in vogue. He likewise took a greater interest in color, textures, and the play of light.

Madrazo’s new methodology served him well, bringing him patronage from rich American businessmen such as the aforementioned William Hood Stewart, who acquired Madrazo’s Departure from the Masked Ball (La Sortie du Bal) (location unknown), a scene depicting costumed revellers for which the artist was awarded a gold medal at the 1878 Exposition Universelle. Madrazo’s lively figure subjects also caught the attention of the railroad magnate and philanthropist William Henry Vanderbilt, who purchased his deftly rendered Masqueraders (1875–78; The Metropolitan Museum of Art, New York) for his collection. Sales of Madrazo’s work went hand in hand with positive critical reviews. After about 1878, Madrazo rarely exhibited his work in Paris, eschewing standard promotional venues, such as the Salon, since his paintings were being successfully marketed to art aficionados, in France and abroad, by the influential art dealers Adolphe Goupil and George A. Lucas.

In the ensuing years, Madrazo continued to paint genre subjects, including small-scale tableautins, which proved popular with international collectors, especially in France and England. Most importantly, he quickly emerged as the great Spanish master of the society portrait in the French tradition, attracting a transatlantic clientele that included royalty, business tycoons, politicians, socialites, and people from the worlds of art and culture. Madrazo’s extensive activity as a portraitist to the rich and famous would occupy him well into the early 1900s.