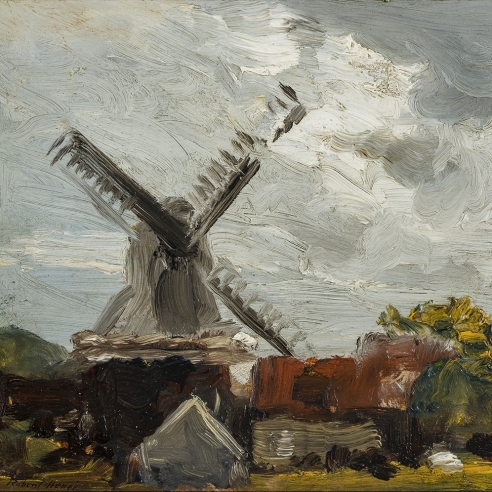 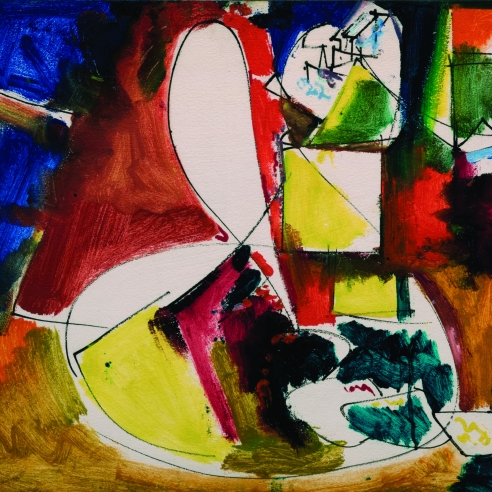 Born Robert Henry Cozad, Henri was of French, English, and Irish origin. The son of John Jackson Cozad, a professional gambler and real estate developer, and his wife, Theresa Gatewood, he spent his early years in Cozad, Nebraska (a town founded by his father) and Denver, Colorado. In 1883––after John Jackson Cozad killed an employee in self-defense––the family moved to Atlantic City, New Jersey, and assumed new identities: Henri’s parents took the surname of Lee, while their son’s last name was changed to Henri (pronounced Hen-Rye).

Henri initiated his formal training at the Pennsylvania Academy of the Fine Arts in Philadelphia in 1886, spending the next two years studying with Thomas Anshutz and Thomas Hovenden. In 1889, he traveled to Paris, honing his skills at the Académie Julian and, for one semester in 1891, at the École des Beaux-Arts.  Upon returning to Philadelphia, Henri re-enrolled at the Pennsylvania Academy, where he received instruction from Anshutz and the impressionist painter, Robert Vonnoh. During this period, he fraternized with a group of newspaper illustrators and aspiring painters––including William Glackens, George Luks, Everett Shinn, and John Sloan––who would later join him in New York to form the so-called Ashcan School.

Henri lived in Paris during 1895–97 and 1898–1900.  Like many of his compatriots, he was influenced by French Impressionism, especially the realist faction as represented by Edouard Manet. His sojourns abroad also provided him with the opportunity to visit museums and galleries in London, Holland, and Spain, where he saw the evocative portraits of James McNeill Whistler, as well as the painterly, low-keyed figure subjects of seventeenth-century Old Masters such as Frans Hals and Diego Velázquez. Henri went on to work in a dark, tonal impressionist manner, winning his earliest recognition when one such canvas––a cityscape entitled La Neige (Snow)––was acquired by the French government for the Palais du Luxembourg in 1899.

In 1900, Henri established his studio in New York and began participating in the annual exhibitions of the Society of American Artists and the National Academy of Design, where he was elected an academician in 1906. During this period, he became renowned for his portraits, executed in a candid realist style. Consistent with his humanistic point of view, Henri avoided idealizing his subjects, focusing instead on capturing their character and individuality; a painter of gypsies, Indians, Chinese-Americans, society types, and many more, he once referred to his sitters as “ ‘my people,’ whoever they may be, wherever they may exist, the people through whom dignity of life is manifest . . . who are in some way expressing themselves naturally along the lines nature intended for them." This same credo was adopted by Henri’s Philadelphia cohorts, who also settled in New York, where they focused their attention on gritty urban themes related to daily life in the immigrant neighborhoods of the Lower East Side.

Despite his affiliation with the venerable National Academy of Design, Henri was dismayed with that institution’s practice of excluding younger, progressive-minded artists from its ranks. In 1904, taking advantage of the liberal exhibition policies at the National Arts Club, he organized the Loan Exhibition of Pictures by Eminent American Painters, an important show which featured his own work and a selection of paintings by Luks, Sloan, and Glackens, as well as paintings by Maurice Prendergast, a pioneering post-impressionist, and Arthur B. Davies, who was breaking new ground with his visionary landscapes.

In the ensuing years, Henri continued to promote artists working outside the academic mainstream. In 1907, when several paintings by members of his circle were rejected for inclusion at that year’s annual exhibition of the National Academy of Design, he and Sloan organized the legendary exhibition of The Eight, held at the Macbeth Galleries in New York in February 1908. Henri went on to arrange the Exhibition of Independent Artists of 1910 (the country’s first non-juried, no-prize exhibition) and he was likewise involved in the organization of similar shows at New York’s MacDowell Club from 1911 to 1919. Although Henri initially participated in the planning of the 1913 Armory Show (International Exhibition of Modern Art), he ultimately withdrew his services, feeling that too much emphasis was being given to avant-garde European art. In the wake of that controversial exhibition, Henri’s realist approach, and that of his Ashcan School colleagues, gained acceptance from New York’s art establishment.

Henri initiated his activity as teacher and mentor in 1892, when he became an instructor at the Philadelphia School of Design for Women (known today as the Moore College of Art). One year later, he was teaching outdoor painting classes in Darby Creek, Pennsylvania.  He went on to hold positions at the Chase School of Art (1902–09, known today as the Parsons School of Design) and the Modern School of the Ferrer Society (1911–16). In 1909, he established the Henri School of Art, which he oversaw until 1912, when he joined the faculty of the Art Students League of New York.  Over the course of his teaching career, Henri passed his artistic beliefs on to a generation of students that included realist painters such as Edward Hopper and Rockwell Kent, as well as exponents of Modernism, among them Stuart Davis, Yasuo Kuniyoshi, and Man Ray.