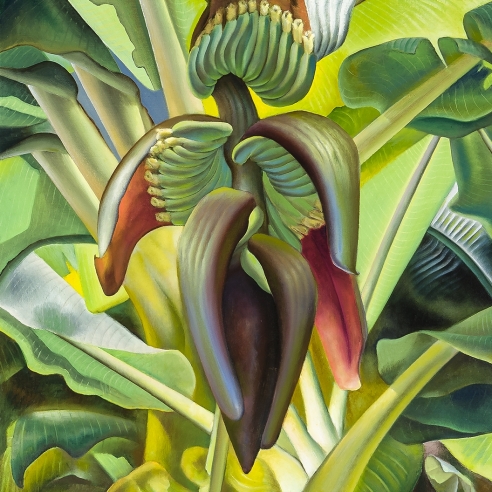 Ross Braught was born in Carlisle, Pennsylvania. His father, John Braught, was a factory worker who painted in his spare time. Taking his cue from his father, Braught developed an interest in art during his high school years, when he began making drawings of trees and plants––a theme he would explore as a mature artist. After graduating, he studied at the Pennsylvania Academy of the Fine Arts in Philadelphia, where he received instruction from the American impressionist painter, Daniel Garber. In addition to honing his drawing skills under Garber, Braught also assimilated aspects of his teacher’s landscape style, especially the way in which he used tree trunks, foliage, and branches for decorative purposes.

After winning the prestigious Cresson Memorial Traveling Scholarship in 1921, Braught traveled to England and Italy. In 1922, he made his professional debut at the annual exhibition of the Pennsylvania Academy of the Fine Arts, showing a selection of landscapes painted in rural Pennsylvania. One year later, Braught married Eugenia Osenton, the daughter of a noted lawyer from West Virginia. For the next five years, he lived in Upper Black Eddy, a small village along the Delaware River in Bucks County, Pennsylvania, where he painted views of local scenery. In the years that followed, Braught exhibited intermittently at the Pennsylvania Academy, as well as at venues such as the Art Institute of Chicago, the National Academy of Design in New York, and the Corcoran Gallery of Art in Washington, D.C. He had his first one-man show at the Dudensing Gallery in New York in 1925. During the 1930s, Braught was represented by the Ferargil Galleries, known for its promotion of contemporary American art.

In 1928, Braught moved to Woodstock, New York, going on to fraternize with members of the local art colony and making his earliest forays into lithography. Three years later he was appointed head of the painting department at the Kansas City Art Institute, where he developed a reputation as a dignified yet slightly eccentric Bohemian––it was said that he was tall, resembled Boris Karloff, and often wore a black cape. Between 1931 and 1936, Braught made regular summer visits to Arizona, South Dakota, and Colorado, making sketches of barren plains, mountains, valleys, and canyons that he later translated into easel paintings and prints. During these years, his work took on a surreal quality, as apparent in key paintings such as Tchaikovsky’s Sixth (1935; The Nelson-Atkins Museum of Art, Kansas City), an evocative view of the rolling Badlands of South Dakota, in which Braught conveyed the underlying spirit of his subject through simplified forms and a palette of subtle earth tones.

In early 1935, Braught was informed that the regionalist painter, Thomas Hart Benton, had been hired as the new Director of the Painting Department at the Art Institute. He subsequently resigned from the school’s faculty, although he did become friendly with Benton, who admired Braught’s skills as a draftsman and owned some of his drawings.

In 1936, Braught created what many scholars regard as his masterpiece: Mnemosyne and the Four Muses, a 27-foot high mural for the art-deco lobby of the Kansas City Music Hall. Later that year, he spent several months on a small island off Tortola in the British Virgin Islands. Responding to the dazzling light and luxuriant beauty of his new surroundings, Braught adopted a bright, high-keyed palette which he applied to depictions of tropical flora.

For Braught, the allure of the tropics was strong: towards the end of 1939, he left his job at Cornell and relocated to Tortola, where he and his family lived for the next seven years. In addition to painting tropical imagery and including dream-like landscapes with figures, Braught traveled to Dutch Guiana (Surinam) to gather material for a mural he was working on at Fort Buchanan, Puerto Rico. In 1946, at the behest of the sculptor Wallace Rosenbauer, he returned to Kansas City and resumed teaching at the Art Institute, where his students (many of them ex-GIs), appreciated his technical skills, his no-nonsense manner, and his belief that an artist should study nature in “all its moods and colors and forms.” Exhibitions of Braught’s work were held at the Art Institute in 1951, 1956, and 1959. He resided in Kansas City until his retirement in 1962, when he returned to Philadelphia, where he died on October 12, 1983.

After moving back East, Braught became something of a recluse: withdrawing from the art world, he stored his paintings in a warehouse and left his prints and drawings with his son. Despite the fact that friends, former students, and curators attempted to contact him, he remained aloof––his exact whereabouts in Philadelphia was a mystery since a post office box was his only known address. Braught’s reputation drifted into obscurity until 2000, when Hirschl & Adler Galleries organized Ross Braught, 1898–1983: A Visual Diary, the only solo exhibition of his work since his passing. The artist’s accomplishments have subsequently attracted attention from collectors and curators alike, including art historian Henry Adams, who recently examined the influence of Braught’s visionary paintings on Jackson Pollock’s ceramics (“Where Did Jackson Pollock Get His Ideas?,” Smithsonian.com, May 24, 2012).