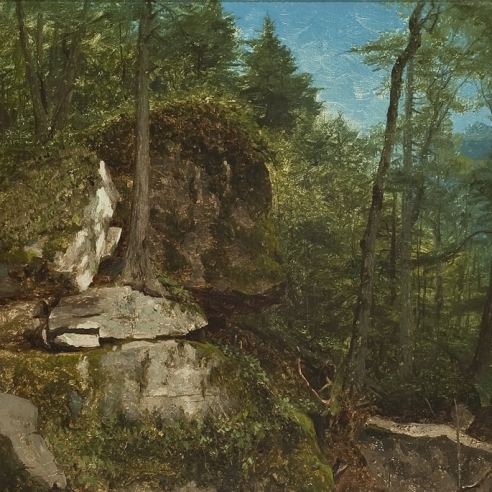 Sanford Gifford was a son of the Hudson River Valley, born in Saratoga County, New York, in the southeast Adirondacks, and raised in the town of Hudson, where his father owned an iron foundry. (For the fullest accounts of Gifford’s life and career, Ila Weiss, Poetic Landscape: The Art and Experience of Sanford R. Gifford [1987]. The more recent exhibition catalogue by Kevin J. Avery and Franklin Kelly, eds., Hudson River School Visions: The Landscapes of Sanford R. Gifford, exhib. cat. [New York: The Metropolitan Museum of Art, 2003], builds on Weiss’s work.) After attending Brown University for three semesters, Gifford went to New York City in 1845, where he  studied drawing with John Rubens Smith, an English emigré who offered private instruction. In New York, Gifford also spent two years in classes at the National Academy of Design. The young man was much influenced during that time by the long shadow cast by Thomas Cole, the eminent landscape painter who today is considered the founder of the canonical American style of landscape painting, the Hudson River School. During this period, Gifford’s early interest in portraiture was transformed into a lifetime passion for landscape work. From 1847 until 1852, Gifford submitted landscapes to the short-lived American Art-Union in New York, as well as to the annual exhibitions of the National Academy of Design. In 1851, he was elected an associate member of the National Academy, and three years later, in 1854, a full academician.

In 1855, Gifford sailed to Europe, a necessary pilgrimage for young American artists who needed to see for themselves the Old Master paintings that were largely available in America only in replica. Gifford visited England, France, and Italy, meeting John Ruskin, the eminent English art critic, Jean-François Millet, the revered painter of French peasants, and traveling for part of the time with another young American artist, Albert Bierstadt. When Gifford returned to New York in 1857, he took a studio in the recently completed artist’s studio building at 15 West Tenth Street in Greenwich Village, which remained his New York City home for the rest of his life. Gifford’s landscape style evolved, in the wake of his two-year sojourn in Europe, from a Pre-Raphaelite-influenced literal transcription of nature to expansive, light-filled compositions that heralded the advent of his mature style, which blended elements of luminism with a distinctive concern for light and air.