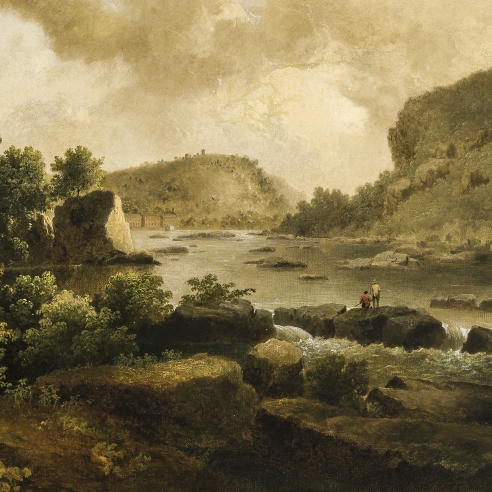 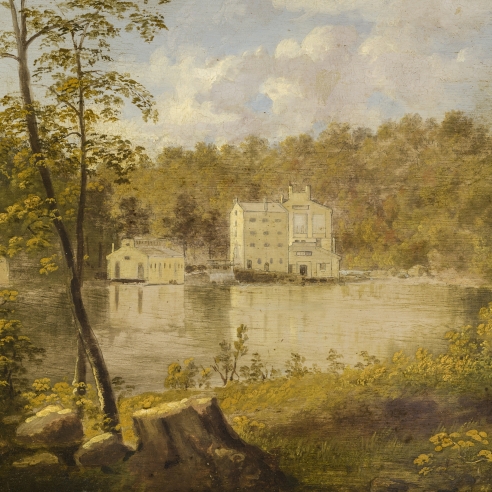 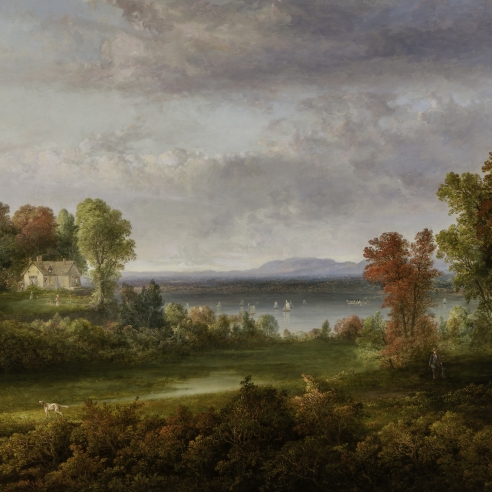 Thomas Doughty was born in Philadelphia on July 19, 1791, one of five sons in the family of James Doughty, a shipwright, and his wife, Martha Young Doughty. (The major work on Doughty remains Frank H. Goodyear, Jr., Thomas Doughty, 1793–1856: An American Pioneer in Landscape Painting, exhib. cat. [Philadelphia: Pennsylvania Academy of the Fine Arts, 1973.] A recently available baptism record supports a birth date of 1791, not 1793 as previously reported.) Thomas was apparently adept at drawing as a boy, encouraged perhaps by the example of his eldest brother William, who was already enjoying impressive success as a naval draftsman. Apprenticed in adolescence to his brother Samuel to learn the trade of the "leather business," he left the shop to pursue a career as an artist. In 1816, Doughty showed an “original” landscape painting at the Pennsylvania Academy of the Fine Arts. Though he returned briefly to the leather trade in 1818, by 1820 he had given it up forever, resolved to pursue the life of the artist.

As recorded by William Dunlap in the History of the Rise and Progress of the Arts of Design in the United States (New York: Dover Publications, Inc., 1834; reprint 1969, vol. II, p. 380), Doughty confirmed his lack of formal artistic training:

The ... only instructions I ever received, were, I may say almost in my childhood at a most excellent school: our master used to allow those boys who evinced any talents for drawing, one afternoon in each week to practice, but without the aid of a master.

Subsequently, Doughty learned his craft by copying paintings of European masters, including Poussin, Salvator Rosa, Albert Cuyp, and Jacob Ruisdael, works that that he found in the collection of an encouraging patron, Robert Gilmor, Jr. of Baltimore. Early in his career Doughty established an enduring friendship with an older Philadelphia artist, Thomas Sully. Beginning in 1822, Doughty was a prolific contributor to the annual exhibitions at the Pennsylvania Academy of the Fine Arts, exhibiting landscapes of the Schuylkill, Brandywine, Hudson, and Connecticut Rivers. In 1823, the Philadelphia art community was enhanced by the arrival of an ambitious newcomer, ten years Doughty’s junior, English immigrant Thomas Cole. Cole had lived with his family in Philadelphia briefly in 1818, on their arrival in America. Like Doughty, determined to be an artist, and like Doughty, largely self-taught, and like Doughty again, interested in landscape, Cole returned to Philadelphia in late 1823 and remained until spring 1825, sketching from the casts of antique statues at the Pennsylvania Academy. Cole showed a landscape at the Academy in 1824, the year before he was “discovered” in New York by John Trumbull, Asher B. Durand and William Dunlap. In the latter half of the 1820s, Cole and Doughty both showed at the Pennsylvania Academy where Doughty was named an Academician in 1824. Cole was doubtless familiar with the work of his fellow exhibitor.

While Cole moved in the direction of ambitious allegorical or ideal landscapes, it remained Doughty’s practice, early and late, to travel to scenic waterways in search of inspiration for painting subjects. Landscape, and especially riparian landscape, was Doughty’s métier and his joy. A later critic noted that “from his earliest boyhood he loved the woods, the streams, the hills and the valleys. He dwelt with them—he felt their power—he made them his study and delight" (E. Anna Lewis, "Art and Artists of America," in Graham's American Monthly [November 1854], pp. 483–84, as quoted in Goodyear, p. 15). Just as Cole left Philadelphia for New York in 1825, in 1828 Doughty decided to seek a larger market for his work in Boston. By 1830, he was back in Philadelphia, and again, in 1832, in Boston. For the rest of his life, he shuttled periodically between Boston, New York, and Philadelphia, always looking for the elusive degree of prosperity that would enable him to support his large family. The years between 1832 and 1837, which Doughty spent in Boston, were relatively successful, as he gained modest recognition for his sketches of the White Mountains in New Hampshire, the Catskills, and the coasts of Massachusetts and Maine. Doughty’s life might indeed have followed a different trajectory had he been hired as an art instructor at the University of Virginia. Married in 1817, by 1825 he was the father of a growing family. In his later years, Doughty traveled incessantly to find new subjects to paint and struggled to sell sufficient work to support his large family.

Although he could ill afford it, Doughty, his wife, and their children, went to London in 1837. During his stay, he frequently dined with Thomas Sully, George Healy, and John James Audubon. Either lack of money or poor health forced Doughty to sail back to the United States in 1838, and for the first time he settled in New York, where, except for another trip abroad in 1845, he remained for the rest of his life. He spent winters in his city studio and traveled summers to suitable locations for his landscapes.