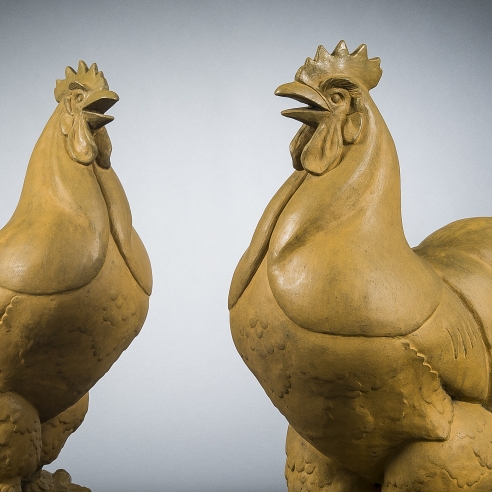 Born in Chicago, Wheeler Williams studied sculpture at the Art Institute of Chicago before enrolling in Yale University, graduating magna cum laude. He then received his master’s degree in architecture from Harvard in 1922, and he won the medal of the American Institute of Architects that same year. Williams had continued sculpting throughout his graduate studies, and in 1922 he won the Prix de Rome for work he produced in collaboration with John Albert Wilson (1877–1954). Williams subsequently chose sculpture over architecture, and spent the next eight years in Paris, studying at the École des Beaux-Arts under Jules Coutan before establishing his own studio. In 1928, Williams opened a studio in New York, and upon his permanent return to the United States he made some of his sculpture there, though he also produced a significant amount of work in California.

Williams was extraordinarily successful over the course of his career. His many public monuments include Tablets to Pioneers (1930), which honors early French explorers in Chicago; Communications (1935), which adorns the West Pediment of the Environmental Protection Agency building (formerly the Interstate Commerce building) in Washington, D.C.; Indian Bowman (1938), for the United States Post Office Canal Street Station, New York; Settlers of the Seaboard (1942), in Fairmont Park, Philadelphia; and The Venus of Manhattan (1949), for the Parke Bernet Gallery, New York. Williams also designed a number of medals, including one for the Phillips Exeter Academy, Exeter, New Hampshire, and the Plimpton Medal for Yale University. He was also highly sought-after for portrait busts. Williams was a member of the National Academy of Design, president of the Fine Arts Federation of New York, and longtime president of the National Sculpture Society. He also was a founder and president of the American Artist Professional League.