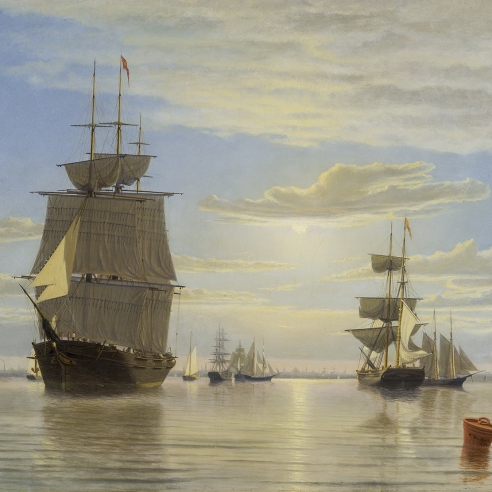 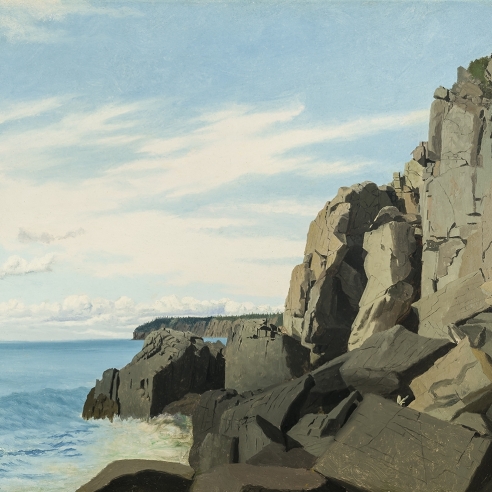 In 1852, twenty-nine year old William Bradford was a failing shopkeeper in Fairhaven, Massachusetts. With a wife and child at home, Bradford, by his own admission, “spent too much time in painting to succeed” in business. Rescued from insolvency by his well-to-do in-laws, this is not the beginning of a narrative that generally leads to a happy ending. Not so with Bradford, who ultimately found international fame and fortune as a painter of arctic seascapes and dramatic marine paintings. (The best source for Bradford remains Richard C. Kugler, William Bradford: Sailing Ships & Arctic Seas, exhib. cat [New Bedford, Massachusetts: New Bedford Whaling Museum, 2003], the source for all information in this essay unless otherwise indicated. Bradford is quoted in Kugler, p. 4, from Leonard Bolles Ellis, History of New Bedford and Its Vicinity, 1602–1892, vol. II [Syracuse, New York: Mason, 1892], p. 99).

William Bradford, the artist, was a lineal descendant of the seventeenth century Separatist leader William Bradford, a founder of the Plymouth Plantation, signer of the Mayflower Compact and Governor of the Plymouth Colony. Our Bradford born to a New Bedford ship outfitter in Fairhaven, Massachusetts By the nineteenth century, this line of Bradfords were Quakers, living on the tract purchased nearly two centuries earlier by their pilgrim ancestor. Fairhaven, across the mouth of the Acushnet River from the whaling center of New Bedford was described by a New York journalist in 1857 as “the Brooklyn of New Bedford” (Kugler, p. 8, quoted from the Home Journal, January 3, 1857). Young Bradford displayed an early predilection for the arts, but his Quaker parents were disinclined to support this particular pursuit. After working in his father’s business and then for a dry goods merchant in New Bedford, by 1849 Bradford had set up in New Bedford as a “merchant tailor” offering outfits for “those going to California,” “seamen’s clothing,” custom-tailored “piece goods” and “friend’s wear” (illus. circular, p. 4). But despite his parents’ best efforts, Bradford was an indifferent businessman, finding his passion on the shores of the New Bedford harbor, accompanied by sketch book and easel. By 1852, Bradford had determined to pursue a career as a marine painter.

Late in life, William Bradford described his first training in art: "In my youth I became a clerk in a dry goods store in New Bedford . . . But all this time my love for drawing was growing stronger. Alone and unaided, I copied all the drawings in an English drawing- book, nearly four times through. . . . I kept at it without any master, often till midnight. That is the way I learned my art" (Ellis, p. 98, as quoted in Kugler, pp. 49–50).

In an informative essay, Erik A. R. Ronnberg Jr., reconstructs with a combination of documentation and hypothesis, the arc of Bradford’s early training and career (“William Bradford: Mastering Form and Developing a Style, 1852–1862,” in Kugler, pp. 47–71). At the same time that Bradford would have studied books on naval architecture, marine drafting, as well as drawing instruction manuals, he closely observed the boats that crowded the wharves and waters around New Bedford. Bradford would also have benefitted by his exposure to the work of two famous marine artists working nearby, Robert Salmon and Gloucester native Fitz Henry Lane. By 1852, Bradford realized the limitations of his self-study He traveled to New York City and sought out Albert Van Beest (1820–1860), at the time the leading European marine painter in America, whom he convinced to come to Fairhaven and share a studio for two years. The two worked closely during their stay together, on several occasions collaborating on paintings. Bradford temporarily adopted Van Beest’s dramatic and expressive style, but, following their separation, he reverted to his characteristically realistic, linear approach to marine painting. Throughout his career, Bradford maintained a use of glowing light in his work that both enlivens and gives a sense of drama to his paintings, allying him with the overall painting movement now described as luminism.

While Bradford’s early practice consisted largely of ship portraits commissioned by Massachusetts ship owners, his time with Van Breest in the mid–1850s gave him new confidence and increased skill. In 1858, he contributed New Bedford Harbor at Sunset (New Bedford Whaling Museum, see Kugler, p. 99 plate 13 illus. in color) to the New Bedford Art Exhibition organized by his fellow townsman, Albert Bierstadt. Afterward, he accompanied Bierstadt on a sketching expedition to Newport. In 1859, Bradford left behind his provincial beginnings. Moving to Boston, he took a space in the Tremont Street Studio Building. That same year he shared an exhibition at the Williams and Everett Gallery with Gloucester native Fitz Henry Lane (1804–1865). In 1860, Bradford exhibited for the first time at the National Academy of Design in New York and took a studio in the New York Tenth Street Studio Building, which he maintained as his winter headquarters with a few interruptions until 1877.

Bradford was among the first painters to employ extensively the use of photography in his work. On his several trips to the Arctic he documented his travels by taking numerous photographs. For the most celebrated of his expeditions, a trip in 1869 to the Arctic regions, Bradford left in a ship equipped with a full photographic studio. Upon his return, he drew inspiration from the many photographs he had taken, although he seems never to have copied any of his photographs directly into paintings. He instead used photography to familiarize himself with particular details of Arctic scenery, which he then translated to his canvases.

Following his arctic voyage of 1869, Bradford spent 1872 and 1873 in England. As had many of his marine-painter forebears, Bradford found favor with the English court. He was received by Queen Victoria and exhibited some of the approximately 700 photographs taken during the expedition. The Queen was apparently impressed, for she gave Bradford the most significant commission of his career. He painted The Panther off the Coast of Greenland under the Midnight Sun (coll. H.R.H. Queen Elizabeth II, London), which the Queen subsequently installed in her library at Windsor Castle. Following the successful reception of his photographs at court, Bradford determined to publish them along with a recounting of the voyage in a single volume. In 1873, he released The Arctic Regions, a huge volume which contained 125 hand-tipped photographs. Queen Victoria was its first subscriber. Contemporary reviews of The Arctic Regions were extremely favorable, which helped establish Bradford’s reputation as a painter. Bradford’s English audience, conditioned by the “truth to nature” art aesthetic of the influential critic, John Ruskin, appreciated the verisimilitude of his work. His paintings were seen as “the only works which profess incontrovertible truth in the representation of the northern regions” (“The Arctic Regions,” The Art Journal (London) XII [1873]).

By the late 1870s, Bradford was enormously successful. He moved west to California and established a studio in San Francisco. He painted such familiar West Coast landscapes as Mount Hood and Yosemite, much the same as his friend Albert Bierstadt, with whom Bradford earlier had shared space in New York’s Tenth Street Studio. In the late 1880s he returned east, where he continued to paint until his death in 1892.