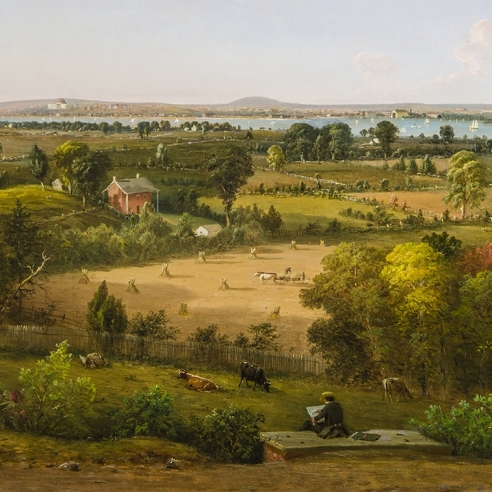 A key figure in the art life of Washington, D.C. during the second half of the nineteenth century, William MacLeod was active as both an artist and curator. In his role as the capital’s first landscape painter, MacLeod created panoramic views of local and regional scenery, and in so doing helped introduce the transcriptive realism of the Hudson River School to the city’s art audiences. He also served as the first curator of the Corcoran Gallery of Art, one of the country’s earliest fine art institutions.

MacLeod was born in Alexandria, Virginia (then part of the District of Columbia), to Scottish parents. His connection with the city of Washington was established at an early age, when he witnessed the burning of the city by the British in 1814; later on, he would see it transformed into the nation’s capital based on the architectural plan designed by the French-American military engineer Pierre-Charles L’Enfant. After completing his schooling, MacLeod pursued medical training at the University of Glasgow, in Scotland, during which time he began visiting museums and art galleries and learned to paint.

After returning to America during the late 1830s, MacLeod traveled and painted in locales such as New York, New Hampshire West Virginia, Pennsylvania, and Virginia. By 1843, he had established himself as a professional landscape painter in Alexandria and Washington, exhibiting his work in the art section of the First National Fair for the Exhibition of American Manufactures in 1846. In about 1848 he moved to New York, where he enhanced his familiarity with the thematic and stylistic proclivities of the Hudson River School. From 1848 to 1852, MacLeod exhibited his oils––views of the Delaware and Hudson Rivers, Washington, D.C., New Jersey, New England, and the Scottish Highlands––at the American Art-Union, and maintained a studio at the New York University Building. He also participated in the annual exhibitions of the National Academy of Design in 1852 and 1853.

MacLeod remained in New York until 1854, when he returned to Washington and opened his own art school and studio at 12th and F streets. He also resumed his activity as a landscape painter, focusing his attention on sweeping panoramas of local scenery.