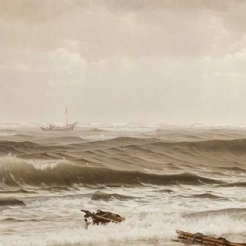 William Trost Richards was a Philadelphia-born artist whose long and successful career spanned the entire second half of the 19th century. Richards was a serious young man who dedicated his free time to deliberately self-improving activities. He honed his skills in observation and drawing by walking through the wooded areas near Philadelphia sketching from nature. By 1850 Richards had found work as an “ornamental copyist,” producing engraved catalogue drawings for Archer, Warner and Miskey, a local firm engaged in the manufacture of gas fixtures, chandeliers, and lamps.

Between 1850 and 1855, when he went to Europe to complete his professional training, Richards did everything he could do in Philadelphia to build the foundations of his artistic practice. He studied with Paul Weber, a recent German emigré, who instructed the young American in the techniques that characterized the German school of art: meticulous attention to detail combined with precise draftsmanship. Richards first exhibited at the Pennsylvania Academy of the Fine Arts in 1852. By 1854 he was able to give up his salaried position and devote himself full-time to artistic pursuits. The European trip was financed by patrons in Philadelphia who believed in Richards’s talent and promise. Early in his career, Richards was deeply moved by the allegorical works of Thomas Cole. As a young artist he painted romantic landscapes in the manner of Washington Allston, Thomas Doughty, and Asher B. Durand. In 1854, sketching in the Catskills, he met Frederic Edwin Church and John F. Kensett. When Richards returned from Europe in 1856, the combination of his German-influenced training with Paul Weber, time spent in Düsseldorf, the writings of John Ruskin, and his own religious reverence for nature coalesced into a period of carefully observed nature studies. In a series of works of the early 1860s Richards examined nature in intimate microcosm.

Richards showed 25 pictures at the Pennsylvania Academy of the Fine Arts, Philadelphia, in 1862, all but one of them landscapes. Richards continued to vary his landscapes with marine scenes through the 1860s. Richards enjoyed great commercial success during this decade. As the Civil War decade wore on and the vogue for the Pre-Raphaelite style waned, Richards worried that a generation of artists painting in a brushier, moodier, Barbizon-influenced style would supplant him. Funded by generous commissions he traveled with his wife and two children to Europe in 1866–67 to refresh his spirit, visit old haunts, and perhaps better understand the increasing popularity of contemporary European art among American art patrons. Richards visited the Paris Exposition of 1867 where he was represented by two works. On the voyage home, a serious storm near New York harbor nearly scuttled the ship, giving the Richards family an unwelcome first-hand experience with the power of the turbulent sea.

In the 1870s, Richards began to concentrate on marine views, varying his earlier emphasis on woodland landscapes painted in a precise American Pre-Raphaelite style. As the century wore on, Richards became famous as a painter of coastal and ocean subjects, producing a large and varied body of these views.