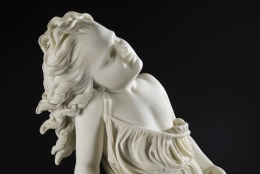 Ives first modeled Sans Souci (“Without Care”) in Rome in 1863. The work features a barefoot girl daydreaming while seated on a tree stump. Her flowing ringlets are typical of hairstyles worn by young ladies of the mid-19th century, however, as was characteristic of his approach, Ives adds a classicizing element by depicting his model in belted tunic, similar to a Greek chiton, its swirling folds serving as a contrast to the youngster’s smooth skin. Shown with her neck arched back, the child is depicted in a moment of idle reverie, unaware that her dress slipped off her shoulder.

The appealing subject matter and expert modeling of Sans Souci made it one of Ives’s most successful images of child life: according to his studio register, he made 21 replicas for American patrons such as the railroad executive Sidney Dillon, of New York, and the Cincinnati-based hardware magnate, Henry Probasco. The remarkable success of Sans Souci inspired Ives to broach the same subject again in a later companion piece called The Truant (1871; The Chrysler Museum of Art, Norfolk, Virginia), in which a schoolgirl ignores her studies as she holds seashell to her ear.

Sculpture
Back To Top