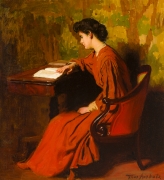 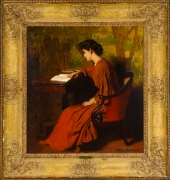 The present painting may depict Rebecca Whelan, one of the artist’s students and daughter of Henry Whelan, the Treasurer and a member of the Board of Directors of the Pennsylvania Academy, who served that institution from 1886 until his death in 1907. Anshutz's association with the Academy, and with Whelan, spanned his lifetime, from his student years through those of Instructor and Dean of Faculty. Rebecca Whelan was among Anshutz's favorite models, posing for at least five major oils and two pastels, each executed between 1905 and 1910, including A Rose (1908; The Metropolitan Museum of Art, New York).

Genre
Back To Top