Detail of signature and inscription. 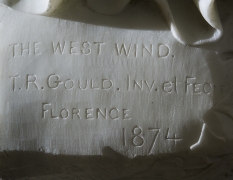 The West Wind, completed in 1870, just two years after the artist’s arrival in Florence, is Gould’s most famous work. It was shown to great popular acclaim at the Centennial Exhibition in Philadelphia in 1876, resulting in orders for at least seven replicas in two sizes that secured Gould’s subsequent financial stability. Gould continued to model in his Florence studio, producing a mixture of portraits and ideal works, and visited his native Boston two times before his death in 1881.

Gould’s immediate inspiration for The West Wind was likely the opening of the transcontinental railroad in 1869, which for the first time connected the rail lines of the far West with the existing railroad network east of the Mississippi River. The figure of The West Wind bears a star-studded belt around her waist, an overt iconography representing the United States. It is also possible that Gould had in mind “Ode to the West Wind,” the famous poem by Percy Bysshe Shelley of 1819, in which the west wind is an allegory of the word of change and revolution. It was also suggested at the time that Gould had created a personification of the wind from the poem “Three Fanciful Supposes” by the Scottish poet, William Motherwell (1797–1835). The first stanza of Motherwell’s verse reads (Poems Narrative and Lyrical by William Motherwell [Boston: William D. Ticknor & Company, 1844], p. 104):

Were I a breath of viewless wind,
As very spirits be,
Where would I joy at length to find
I was no longer free?
O, Margaret’s cheek,
Whose blushes speak
Love’s purest sympathies,
Would be the site,
Where, gleaming bright,
My prison-dome should rise:
I’d live upon that rosy shore,
And fan it with soft sighs,
Nor other paradise explore
Beneath the skies.

Gould began work on The West Wind in 1869 on commission for the Brooklyn, New York, collector, U.S. Representative Demas Barnes (1827–1888). (The sculpture is now in the collection of the St. Louis Mercantile Library Association, Missouri.) As Gould worked on modeling the figure, news of it spread through the European press, with the London Times finding it “an exquisitely beautiful ideal subject”; the London Herald calling it “a very remarkable work;” and the Opinione of Florence declaring it “a work which could never fail of receiving the encomiums of art-connoisseurs." Upon viewing The West Wind in 1869, the Florence-based American critic James Jackson Jarves called it “another ingenious attempt to escape from the bondage of effete personifications into fresher, pertinent styles” (Jarves, Art-Thoughts: The Experiences and Observations of an American Amateur in Europe [New York: Hurd and Houghton, 1869], p. 318).

Gould completed work on The West Wind in 1870 and sent it across the Atlantic to Barnes, who ostentatiously opened his home to the press display his newly acquired purchase. Critical accolades now poured in from the American press. Indeed, there was something in Gould’s magnificent wind-swept figure that inspired critics to pen especially thorough musings on the artwork. The Chicago Tribune wrote of Gould’s sculpture:

It is called “The West Wind,” and it represents a vigorous and graceful young female figure, erect, listening, just ready for flight, with hair and drapery floating in the air, the whole effect of attitude, face and figure being free and strong, yet most delicate. The conception of the work is lauded for originality, and the treatment for great skill and ingenuity (“Art,” Chicago Tribune, January 28, 1871).

In what was to be a recurring theme, another reviewer was gobsmacked by Gould’s masterful handling of the figure’s flowing drapery: “There is a breezy freshness of posture and airy lightness and flowing swell of gently-stirred drapery, with a pleasing animation of features, indicative of the balmy qualities of the wholesomest wind of the American Continent, which particularly commend this idealization to the fancy” (“American Sculpture,” Brooklyn Daily Eagle, February 10, 1871, p. 3). In a similar vein, another critic lauded the work:

The “West Wind” represents a girl from eighteen to twenty years of age, and is about five feet two inches in height. She stands on tiptoe; the drapery falls from her waist, the upper portion of her body being nude. The effect of the wind upon the drapery is most admirably managed; there seems to be a violent gust of wind, and the effect is to reveal a form of beautiful proportions. Her head, with its disheveled hair and splendid profile, is marvelously beautiful (“Unveiling ‘The West Wind,’” Turf, Field, and Farm 12 [March 3, 1871], p. 138).

Mr. Gould has discarded all ideas of the models we are accustomed to consider as the perfection of female beauty. His figure does not remind us, in its outlines, of any Venus, or Eve, or Diana, or Greek Slave that we ever saw. The artist’s inspiration was certainly not drawn from any of these. He has rather chosen to represent an actual rather than an ideal form, and he gives us the counterpart, somewhat idealized, of course, of a vigorous, full-blooded yet refined woman, such a one as may possibly be found in some of our Western homes. It may perhaps be objected that the form is too robust, that the upper portion, particularly, approaches too nearly to the masculine outline.... The artist’s idea, however, was, as we understand it, to produce a type of the sturdy growth and vigorous animal life of our great West.... [The West Wind] certainly shows more originality of idea and more vigor and power of expression than any we have yet seen from the chisel of an American sculptor (“Fine Arts. Gould’s Statue of ‘The West Wind,’” New York Times, February 16, 1871).

In 1876, a full-scale replica of The West Wind (1876, Memorial Art Gallery of the University of Rochester, New York) was sent to Philadelphia to be shown at the landmark Centennial International Exposition. This 1874 model of The West Wind is a reduced version of the 1870 original in the collection of the St. Louis Mercantile Library Association, Missouri. There is one other full-scale version, dated 1876, that is now at the Memorial Art Gallery of the University of Rochester, New York. In addition to the present sculpture, there are two other known reductions of The West Wind: one dated 1874 that was formerly in the collection of Jo Ann and Julian Ganz and sold by Hirschl & Adler to the Orlando Museum of Art, Florida, in 1997; and another, unsigned replica that was sold at auction in 1996.