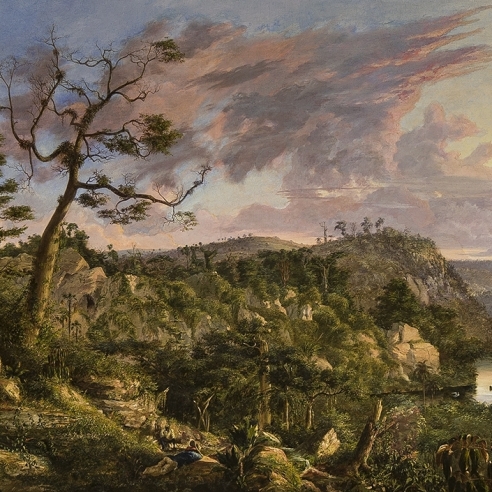 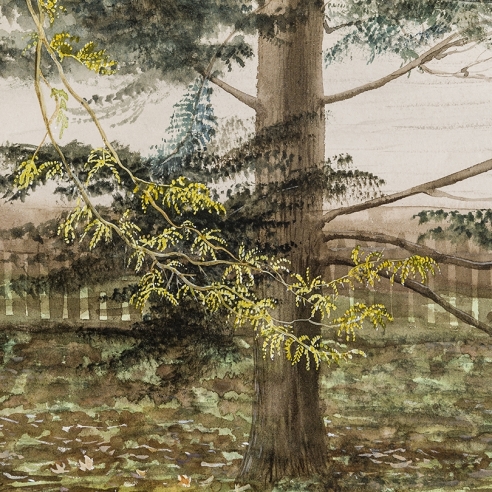 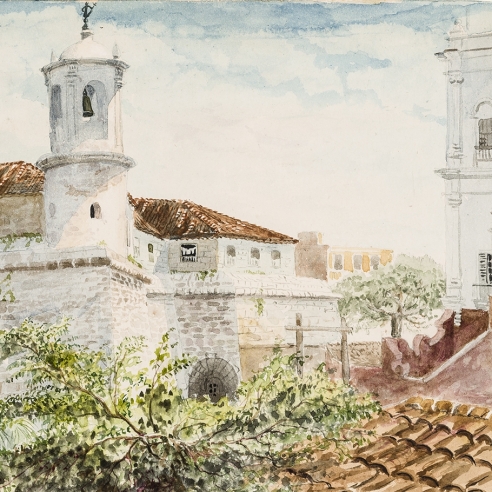 Landscape painter Charles De Wolf Brownell was born in Providence, Rhode Island, but at the age of two his family relocated to Hartford, Connecticut. Brownell’s parents prepared him for a career in law, and in 1843 he was admitted to the Connecticut bar. He served as a barrister for ten years, but after a debilitating congestive attack of the lungs, at the urging of his friend, landscape painter and daguerreotypist Henry Bryant, Brownell decided to pursue a less-stressful career in the arts, a desire which he had privately harbored for many years. He sought training locally, studying in Hartford with artists Julius Theodore Busch and Joseph C. Ropes for an unknown length of time, and he often traveled with Bryant on sketching trips throughout the Connecticut Valley. He maintained a studio in Hartford until 1860, when he left for New York City, hoping to translate his success to a larger arena.

Once in New York, Brownell’s career began to accelerate. He quickly became acquainted with a number of the artists associated with the Hudson River School, including John F. Kensett, Thomas P. Rossiter, and especially Frederic Edwin Church. Brownell had admired Church, himself a celebrated son of Hartford, for many years. On only his second day in New York, Brownell visited Church at his studio, and had lunch with the venerable artist. They quickly became lifelong friends.

Brownell exhibited in New York at such institutions as the National Academy of Design, in 1861–62 and 1864–65, and at the Brooklyn Art Association, in 1863. Brownell seems to have stopped exhibiting after 1865. This can be explained by the fact that immediately following the Civil War, Brownell and his fiancée, Henrietta Pierce, left for Bristol, Rhode Island, and were married shortly thereafter. Brownell remained in Bristol, painting little, until 1871, when he and his family left for a seven-year excursion to Europe, where he executed a number of paintings of European subjects. After their long sojourn, the Brownells returned to Bristol, where Brownell painted, and apparently thought little of exhibiting, for the rest of his life.

Brownell seems to have been eternally restless, for he continued traveling until the last years of his life. In the 1880s, he traveled throughout the Caribbean, including the islands of St. Kitts, Antigua, Martinique, St. Croix, Barbados, Grenada, and Trinidad, and in 1888 he made a visit to Church at Olana, Church’s famous estate in Hudson, New York. In the 1890s, Brownell made a return trip to Cuba, his first since 1866, and voyaged to Mexico, Jamaica, Venezuela, and Chile. The peripatetic Brownell only slowed down in 1908, after over 60 years of constant travel, when his health began to fail and he broke his hip. He died the following year.

Brownell’s most distinctive works are his landscapes of Cuba. Beginning in 1853, while he was suffering from his respiratory illness, Brownell spent seven consecutive winters in Cuba, staying on several sugar plantations owned by his mother’s family, the eminent De Wolfs of Bristol. While in Cuba, Brownell lived a transient lifestyle, staying for short periods on each of the various plantations. He made numerous charcoal and oil sketches, which he later translated into finished canvases. Brownell thus is perhaps the mid-19th-century American artist most closely associated with Cuba.

Brownell made his first trip to Cuba in 1853, the same year Church first traveled to South America, a fact that reveals the similar temperaments of these two artists.  It is fitting that Brownell and Church formed such a strong and lasting friendship, for both artists made repeated travels to Latin American countries throughout their lives and shared their experiences through their correspondence.

Brownell’s repeated visits to Cuba demonstrate his affection for, and interest in, its landscape. He particularly favored the area around Matanzas, the capital of Matanzas Province, located about 30 miles east of Havana, on the northern shore of Cuba. Matanzas was intensively developed during the first half of the 19th century as a slave and shipping port for the area’s sugar plantations.