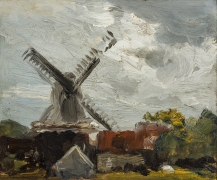 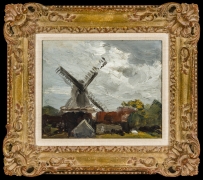 EX COLL.: [Kennedy Galleries, New York]; to Mr. and Mrs. Douglass Carmichael, Washington, D.C., and by descent, until the present

Windmill near Edam captures a quiet moment near the end of a tumultuous decade of Robert Henri’s life. In 1898, he married Linda Craig. In 1899, the French government purchased his Paris Salon picture, La Neige, for the Musée National du Luxembourg. In 1905, after years of precarious health, his wife died. Soon thereafter, Henri’s father also died. While Henri’s career had been steadily building in New York City, so too was his mounting frustration with the conservative establishment at the National Academy of Design. In 1907, simmering tensions with William Merritt Chase led to Chase’s departure from the school which he had founded, leaving Henri as the favorite among the students. February 1908 saw the success of the show of Henri’s group of independent artists at the Macbeth Gallery, while in May, Henri quietly married Marjorie Organ and the two slipped off to a summer in Europe.

Windmill near Edam was painted during a summer when Henri was shepherding a group of students from the New York School of Art in Holland. Though his group was based in Haarlem, this small picture confirms that Henri traveled north and west about thirty miles to the scenic area around Volendam-Edam. The little town of Volendam, about 12 miles northeast of Amsterdam on what was then the Zuiderzee, began to attract artists in the 1880s. An international array of artists came, finding in the tiny, traditional town, the elements of “old Dutch” quaintness that became the visual shorthand for Holland. Windmill near Edam reflects this, as the windmill must have seemed to Henri a small, but eloquent testament to its time and place.