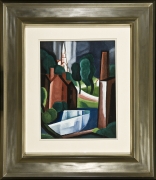 The relationship of Bluemner to his painting locations is curious and not much discussed in the literature. This omission seems perfectly reasonable insofar as Bluemner was emphatically not a transcriber of landscapes. His interest in natural and manmade topography was principally as a vehicle for the expression of human feeling through the arrangement of form and color. New Hampshire Town is a finished watercolor and gouache painting by Bluemner from 1931. According to Jeffrey Hayes, it depicts Laconia, New Hampshire, a small city in Belknap County located near Lake Winnipesaukee. In characteristic compact composition and firmly modeled forms, Bluemner depicts a sloping landscape of houses and commercial buildings that rises to a peak topped by a New England church, its spire rising high above the scene below. The church’s position on the hill over the town creates a sense of unified community. Though Bluemner’s belief in religion is difficult to place, he was attracted to the architectural forms and spiritual symbolism of churches, which he amplifies here with the soaring, brilliant white light that rises from the church high into the night sky. A related work, Laconia, New Hampshire, also dated to 1931, is in the Vera Bluemner Kouba Collection at Stetson University, Deland, Florida.