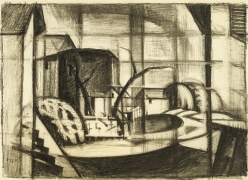 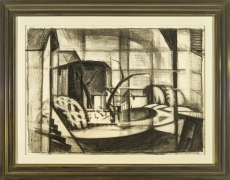 EX COLL.: the artist, until 1938; to either Vera or Robert Bluemner, the artist’s children; to [Irma Rudin, Ltd., Florida]

This charcoal drawing is one of a series of images that take as their starting point the Morris Canal as it passed through Rockaway, New Jersey. The Morris Canal industrial towns that Bluemner chose as the points of departure for his early artistic explorations in oil included Paterson with its silk mills (which recalled the mills in the artist’s childhood home in Elberfeld, Germany), the port city of Hoboken, Newark, and, more curiously, a series of iron-ore mining and refining towns, in the north central part of the state that pre-dated the Canal, harkening back to the Revolutionary War era. The Rockaway theme was among the original group of oil paintings that Bluemner painted in six productive months from July through December 1911 and took with him to Europe in 1912. In his painting journal, Bluemner called this work "Morris Canal at Rockaway N.J." (Archives of American Art, reel 339, frames 150 and 667), and exhibited it at the Galerie Fritz Gurlitt in Berlin in 1912 as "Rockaway N.J. Alter Kanal." After his return, Bluemner scraped down and reworked these canvases. The Rockaway picture survives today, revised between 1914 and 1922, as Old Canal, Red and Blue (Rockaway River) in the collection of the Hirshhorn Museum and Sculpture Garden, Smithsonian Institution, Washington D. C.

For Bluemner, the charcoal expression of his artistic vision was a critical step in composition. It represented his own adaptation of Arthur Wesley’s Dow’s (1857–1922) description of a Japanese drawing technique which Dow called “notan,” from a Japanese word indicating “dark, light.”