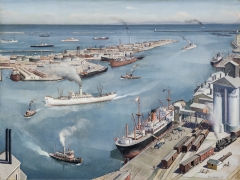 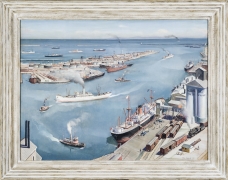 RECORDED: “Eight U.S. Ports: A Portfolio of Paintings Done for FORTUNE by Paul Sample. and Some Simplified Notes on the Imbroglio of Interport Competition,” Fortune Magazine (September 1937), p. 93 illus.

Sample’s most visible presence in the 1930s and 1940s was the result of his relationship with Henry Luce’s burgeoning publishing empire, Time, Inc. Sample’s first contribution to a Luce publication appears to have been another San Pedro Harbor, Los Angeles, which illustrated a Fortune article debating the merits of international trade versus home-grown industry as the best route for recovery from the economic depression that continued to grip the nation. It appeared in September 1934 (p. 62) above the caption “Industry Faces the Sea.” In 1935, again illustrating an article on a New Deal-related topic, the Tennessee Valley Authority, Sample contributed Norris Dam (New Britain Museum, Connecticut) above the caption “Work in Progress.” In December 1936, and January 1937, Fortune ran two articles, “Anaconda I,” and “Anaconda II,” both with original oil paintings by Sample. “Anaconda I” focused on the landscape around the Anaconda copper factory in Butte, Montana. “Anaconda II” featured oil paintings of the process of copper smelting inside the factory. (Butte had been one of the stops on the family odyssey in 1902, when Paul was six years old.) In September 1937, “Eight U.S. Ports” appeared in Fortune, subtitled “A portfolio of paintings, done for FORTUNE by Paul Sample[,] and some simplified notes on the imbroglio of interport competition.” The ports (in the order in which they appeared in the article) were: Los Angeles, California (the present picture); Stockton, California; Seattle, Washington; New Orleans, Louisiana; Houston, Texas; Philadelphia, Pennsylvania; Baltimore, Maryland; and Boston, Massachusetts. Sample’s public profile was further enhanced that November when Luce’s Life magazine ran an illustrated feature article, “From Football and Boxing to Painting is the Strange Career of Paul Sample,” with a photo of the artist and his wife relaxing at home and reproductions of six oil paintings including Norris Dam (November 15, 1937, pp. 42–44). 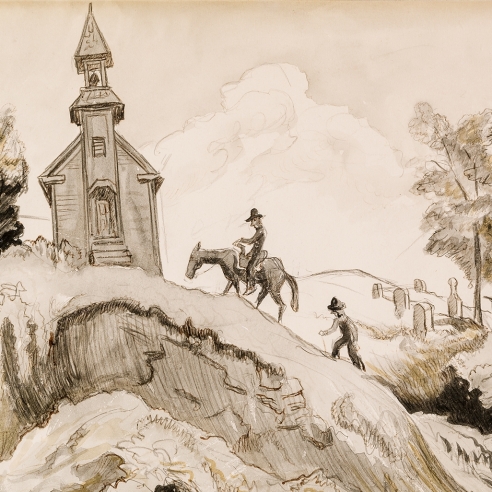